0
You have 0 items in your cart
Go To Shopping
Home > New Articles > 40 years of maritime service: Captain Barbara Campbell tells of life on the sea

Have you ever considered a career at sea? In a fast and forever changing world, a career at sea could stand you in good stead. WeAreTheCity recently caught up with one of the best to have sailed the seven seas – Barbara Campbell, Tall Ship Captain of Tenacious who shared her story of a career at sea spanning 40 years.

Campbell started her professional life at sea as a Deck Cadet with P&O Steam Navigation Co. in 1975. She spent her cadetship mostly on cargo ships and became a Third Officer and then a Second Officer onboard P&O cruise ships.

“I was the first of three females that P&O took on. The other two didn’t stick at it – one became a dentist after a year,” she said.

Campbell said back when she was at college she was the only girl in her class, but when the Royal Navy eventually allowed women to apply she said she did not face any problems entering the industry: “The Royal Navy didn’t take women at sea then. I never thought all those years ago I’d still be at sea now, let alone a Captain.”

“There was one Captain out of six ships who didn’t seem to like women being at sea, but other than that there were no problems getting on in the industry.”

She then spent the next seven years on cruise ships where she obtained both her Mates and Masters certificates, before opting to work for P&O Scottish Ferries running to Orkney and Shetland.

“In 1986 I got my Master’s Ticket, which means I can be a Captain of many other ships. I was the first woman in Scotland to get my Master’s Ticket. I then moved to Scotland Ferries for seven years. There were women around, but no Deck Officers,” she added.

“I do between four and six week at a time currently. My husband used to work at sea too, as an engineer, so we’d try to take leave at the same time.”
She later received an opportunity to move to the Jubilee Sailing Trust, where most of the crew on the ships are untrained “yet everyone works together”.

Campbell explained: “In February 1999 I became a Captain on a Tall Ship, having worked on them since 1996. The number of women working on ships has really gone up – times have changed.

“We train Cadets on our ships too – we have about one in five women.”

Almost anyone can sail on one of the Jubilee Sailing Trust’s ships and they are purpose-built to take a crew of mixed physical abilities.

Discussing the work of her ship ‘Tencious’ Campbell said: “We aim to integrate people with disabilities into the crew, so we have a team of 40 and 20 have disabilities – eight with wheelchairs. We teach them how to be crew and they learn about navigation, etc. “The ages of 16+ can apply to come with us and we have all ages and abilities join us – some have cerebral palsy, multi-sclerosis, or some have had strokes, some are blind, deaf or amputees.”

During their time on the ship the crew keep watches and set sails, steer the ship, keep a lookout, scrub decks and much more.

“The sense of achievement our crew get when they realise that they have played a part in sailing the ship always fills me with pride,” she added.

A normal day for Captain Campbell

Campbell describe a normal day for her when at sea and when in port.

She said: “When at sea I hopefully haven’t been called during the night. I get up at 6:30am and see where we are, check the weather forecasts and organise what we will do for the day with the Chief Mate. Maybe adjust the sail that are set by hand.

“Then I have breakfast and have an early meeting. There are eight paid crew members, five volunteers and four watch leaders.”

She said any big sail adjustments are made between 9-10am and then “we have tea/coffee and cake.”

“Then we have ‘happy hour’, which is used to clean the ship. Then it’s time for lunch and I try to find half an hour at least to myself. Then we have training with the crew which takes us up to dinner. After dinner it’s time for paper work up until about 10pm.”

Campbell said when in port for the day the crew have to manoeuvre the ship into port and tie up the gangway first: “This can take up to an hour. We set time aside for people who want to climb up the rigging or hoist the disabled up the rigging. We repair the sails, if needed, and use the time to get on top of paperwork.

“We check the weather forecast, as people with us will be having a holiday and we don’t want them to be feeling seasick.” 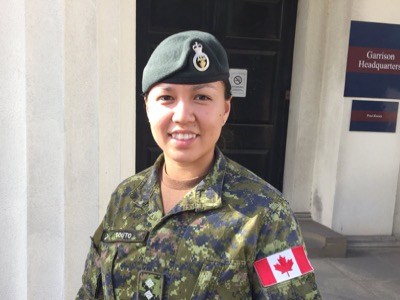