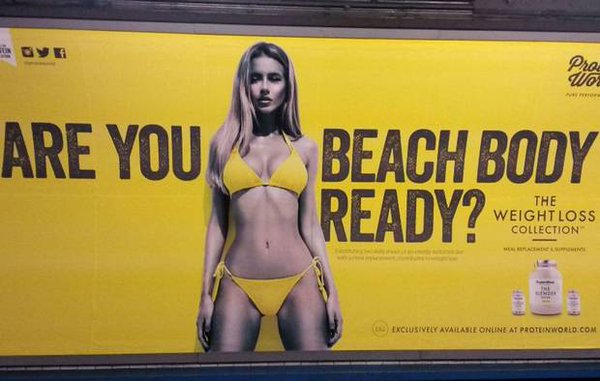 Around half of women think that advertising puts pressure on them to act in a certain way, according to a new survey.

The survey, conducted by media agency, UM London, also found that 44 per cent of women said adverts made them feel that they are ‘not good enough.’

The study, which looked into the representation of women in ads, revealed that the UK population is blighted by unrealistic stereotypes in the media. Of those surveyed, 77 per cent of women claimed they find the way women are generally portrayed to be stereotypical – a claim 65 per cent of men agreed with.

Women identified five recurring stereotypes including, ‘bimbo’, ‘domestic goddess’, ‘shopaholic’, ‘it girl’, and ‘housewife’. Those surveyed said that the most offensive of these was the ‘bimbo’ stereotype.

The survey was carried out among 2,000 Brits aged 13 and over, and follows the recent announcement that the Advertising Standards Authority (ASA) is planning to crack down on adverts that reinforce gender stereotypes.

Due to a backlash from several adverts, the ASA will conduct a review and draw up new rules for advertising that will take effect in 2018.

Speaking about the survey results, Michael Brown, Insight Director at UM London, said, “There seems to be a widespread problem in how brands portray women – and men – in their advertising.”

“As the ASA report noted, stereotyping is rife and has been for years.”

“Companies that can’t come up with ads without the need to reinforce 20th or even 19th century gender stereotypes are just going to turn customers away.”

Alison is the Digital Content Editor for WeAreTheCity. She has a BA Honours degree in Journalism and History from the University of Portsmouth. She has previously worked in the marketing sector and in a copywriting role. Alison’s other passions and hobbies include writing, blogging and travelling.
Previous PostUse these seven words to raise your gameNext PostTesco becomes the first retailer to cover the cost of the tampon tax

Why organisations need to invest in the individual, not the stereotype