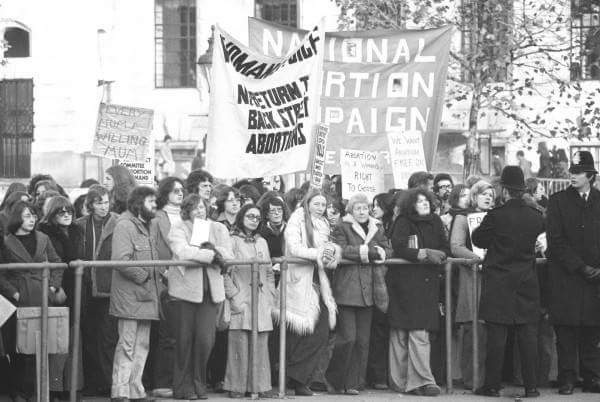 It permitted women to end a pregnancy in England, Wales and Scotland, but was never applied in Northern Ireland.

To mark the anniversary, the Women’s Equality party on Thursday held a demonstration to “fight for reproductive rights”.

Party leader Sophie Walker sent over 400,000 ‘permission slips’ to Home Secretary Amber Rudd, to demonstrate the number of times women have had to ask for abortions in the last year.

The slips were modeled on NHS forms which require two doctors’ signatures, and advise Rudd that she has the signatories’ permission to legalise abortion.

A YouGov poll to mark the 50 year anniversary revealed that the vast majority of MP’s think that a woman should have the right to an abortion if she doesn’t want to continue with her pregnancy.

69 per cent of those polled said they felt a woman should be able to access an abortion if she does not want to continue with her pregnancy.

As it stands, no women are legally allowed an abortion on this basis.

Instead, a woman must receive legal permission from two doctors to state that the pregnancy could have a detrimental effect on her health, or the health of her family.

Ann Furedi, chief executive of the British Pregnancy Advisory Service, said: “We are a pro-choice country. Most people accept that abortion is healthcare that women need in order to live their lives, and our law should reflect this.”

In addition to the 50 year anniversary, Scotland has become the first in the UK to allow women to take the abortion pill at home.