0
You have 0 items in your cart
Go To Shopping
Home > News > Current Affairs for Women > #BreakTheBias: Are men still getting away with it?

This needs to change.

Over the past three years as Chief Technology Officer at Safe & the City, this becomes clearer on International Women’s Day (IWD) when there is much talk about gender equality but mostly led by women. This year, take note of the number of men in the room and the men you invited to be there. This year’s IWD theme of ‘Break the Bias’ needs to start by addressing Article 3 of the Universal Declaration of Human Rights: “Everyone has the right to life, liberty and security of person”. Violence against women and girls (VAWG) has been positioned as a woman’s issue and women’s responsibility to change. Whether the responsibility is labelled as women’s ‘poor decisions’ of where they walk like the case of Sabina Nessa, or how they themselves should interrogate police officers like the case of Sarah Everard. Women are to blame and men can often be seen as victims even in evidenced cases of harassment, rape and even murder.

We’ve all heard the message, but the statistics are stark.

Male perpetrators know the systems in the UK aren’t working, how easy it is to ‘get away with it’ and offend again. This further exacerbates the issue, and women’s withdrawal of trust from these systems emboldens offenders further.

This was clearly highlighted by the pre-cursor behaviour of Sarah Everard’s killer, Wayne Couzens— recognised by his colleagues to the point of nicknaming him ‘the rapist’. While he may have never murdered anyone before, the identifiable behaviours were there, but the silence of men around him encouraged acceptance. Safe & the City’s strategy is to capture the earliest signs of this identifiable behaviour. The vast majority of our reports are verbal sexual harassment, an important and frequent pre-cursor offence of escalating sexual violence. By working with authorities, partners and capturing crowdsourced intelligence, we can use technology in order to reduce risk and implement meaningful and measurable societal change.

This needs to be seen for what it is— a crisis of male violence.

A crisis in which all men need to step up, lead and bring real solutions to the table based on their own lived experiences. The core of this issue needs a change in the behaviour of men, and encouraging their participation and collaboration is a vital barrier we have yet to break.

My interest in technology and safety started early. Before joining Safe & the City, I grew up in one of the most neglected regions of the UK; Inverclyde, Scotland. For a time, also known as the heroin capital of Europe. I grew up under constant threat of gang violence, a pre-teen kid at risk of being beaten or stabbed because my home or school was located in the wrong area. This fear became a normal part of life and I had friends and classmates who served as a reminder of the consequences of being in the wrong place, at the wrong time.

For me, my escape came from the family computer. At the age of 12, I fell in love with programming. We were lucky enough to be one of the first homes in the neighbourhood with an internet connection and it blew my mind. I became fascinated with how computers worked and with the support of my parents, absorbed all the information I could find and taught myself how to code.

Fast-forward 6 years, a friend and I spent 48-hours at a public-safety hackathon organised by Glasgow City Council. We built an app that allowed members of the public to log safety concerns and find walking routes through Glasgow that avoided them. While we didn’t win first prize, the concept remained with me.

When I met Jillian at our shared co-working space and heard about Safe & the City, I offered my support. I became more involved and later joined as the Chief Technology Officer. I saw the volumes of crowdsourced reports of the violence and threatening experiences women had. While I hadn’t experienced the same types of harassment and violence as many of the women or bystanders who had reported, my empathy for their fear was impossible to ignore.

With the upcoming launch of our i3 Intelligence platform, we’re rapidly scaling to ingest even more crowdsourced insights to quickly identify trends, calculate intersectional risks, provide actionable insights and integrations to companies who feel responsible to assist in the safety and well-being of their users.

When we can break our own male biases around VAWG and seek radical change with those who are willing, we can begin to take the much needed steps in improving the safety of women across the world. 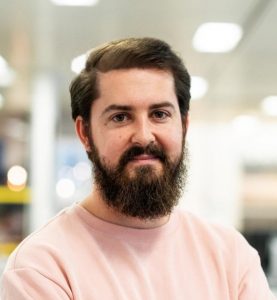 Gary is a software engineer with over 12 years of commercial full stack experience. His love of programming started at the age of 12, which landed him his first developer role by age 16. Despite his youth, Gary has successfully led development teams through the entire lifecycle of agile projects for some of the world’s largest clients, including PwC, KPMG, EY, Missguided.com, and Royal Bank of Scotland. Gary met Jillian at their shared co-working space while building his own digital agency; We are Decade. Gary also had built a similar product to Safe & the City in a 48-hour hackathon many years earlier, which never left his mind about the importance of this type of technology and improving safety in areas where he grew up in Scotland. Gary joined Safe & the City as CTO in February 2019.