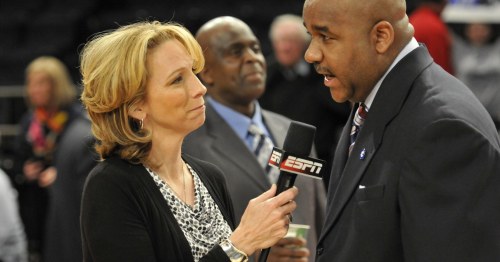 In a report by Richard Deitsch at Sports Illustrated revealed that ESPN has appointed Mowins to conduct the play-by-play commentary in the 2017 season’s first edition of Monday Night Football.

Former NFL coach, Rex Ryan in September, will join Mowins. Her appointment makes Mowins the first woman to conduct the commentary of an NFL game since Gayle Sierens in 1987.

She joined sporting network, ESPN in 1994 and in 2005, became only the second woman to call nationally televised college football games for the network.

In a statement, Stephanie Druley, ESPN events and studio production senior vice president said, “Beth has been an important voice in our college sports coverage and she has experience calling NFL preseason games.”

“She deserves this opportunity.”

“ESPN is committed to putting talented women in high-profile positions and we look forward to Beth and Rex’s call of this game on our MNF opening night.”

Mowins said, “This is an amazing opportunity and I look forward to working with Rex and our entire ESPN team.”

“As lifelong fans of the NFL Monday Night Football franchise, we want to bring the same passion to the broadcast as our predecessors have all done.”

Speaking to the New York Daily News, Sierens spoke of Mowin’s appointment, saying, “This is a woman who is as prepared as anyone, so much more prepared that I was to wear that crown as the first.”

“There’s no publicity stunt, this is not something somebody’s doing for ratings.”

“They’re doing this because she knows her stuff inside out, and she will be fabulous when she does this game.”

Alison is the Digital Content Editor for WeAreTheCity. She has a BA Honours degree in Journalism and History from the University of Portsmouth. She has previously worked in the marketing sector and in a copywriting role. Alison’s other passions and hobbies include writing, blogging and travelling.
Previous PostWomen in tech event: Chicago Booth Women’s Network hosted by McKinsey & CompanyNext PostCould you be the next procurement star?
X