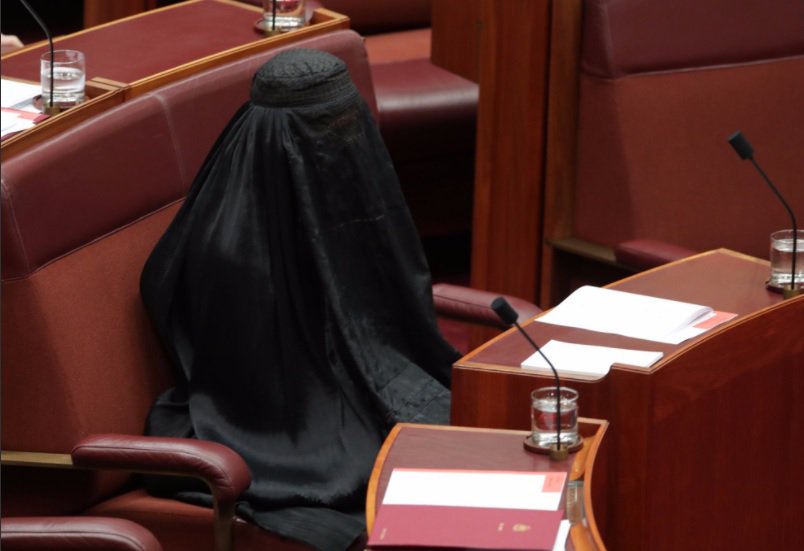 Leader of Australia’s One Nation party, Pauline Hanson has been widely condemned after she attended the Senate chamber in a black burka, in a bid to them.

Hanson wore the burka in Parliament as part of her push to ban it, stating as she removed it:  “This is not what should belong in this Parliament.”

Reports claim Ms Hanson had walked in to gasps from Parliament and one senator was heard to to say “oh, what on earth”.

Approximately 500,000 Australian’s have adhered to the Islamic faith, with Hanson being a vocal objector to the Muslim community, saying in a speech last year that Australia was ‘swamped’ with Muslims.

“To ridicule that community, to drive it into a corner, to mock its religious garments, is an appalling thing to do and I would ask you reflect on what you have done,” said Mr Brandis.

He added: “No, Senator Hanson, we will not ban the burka.”

Making reference to calls by the police to co-operate with the Muslim community in Australia, Brandis said: “To ridicule that community, to drive it into a corner, to mock its religious garments is an appalling thing to do.”

“I am not going to pretend to ignore the stunt that you have tried to pull today by arriving in the chamber dressed in a burka when we all know that you are not an adherent of the Islamic faith,” he said.

“I would caution and counsel you with respect to be very, very careful of the offence you may do to the religious sensibilities of other Australians.”

Following her appearance in the burka, Hanson is reported by The Telegraph to have released a statement saying: “This was a debate that was happening across the world and Australia could not hide from a difficult conversation out of fear of causing offence”.

She later said she had considered wearing the burka into the chamber for months, saying it was “really horrible” and “uncomfortable”.

“I just felt cut off from the rest of the world,” she said.

How to support black colleagues during a pandemic of racism