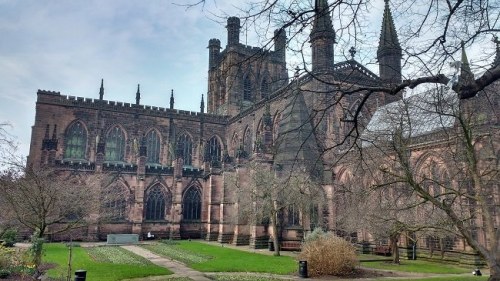 Chester has been labelled the most ‘sexist’ city in the UK due to its gender pay gap, according to new research.

The study, conducted by Adzuna, found that there is a 54.4 per cent pay gap between men and women in Chester. Women in the city averagely earn £24,589 a year, compared to an average of £37,959 for men.

Although the gender pay gap is still an issue across the UK, the study found that men in some cities are being paid up to 54 per cent more than women. On average, men receive £38,000 a year, compared to just £25,000 for women.

The study revealed that Belfast had the narrowest gender pay gap, with a margin of 19 per cent. Southend, Brighton, Glasgow and Luton also reported smaller gender pay gaps than elsewhere in the country.

However, Crawley, Warrington, Worcester, Guildford, Milton Keynes and Hull were all among the cities with the biggest gender pay gap.

The findings come after the World Economic Forum released figures that suggested the global gender gap will take 100 years to close at the current rate of progress.

The World Economic Forum report also estimates that the workplace gender gap will now not be closed for 217 years.

Speaking about the research, Doug Monro, co-founder of Adzuna, said, “There is no easy fix to even-out pay levels, but employers must show more support to female staff.

“We can boost women in the workplace by helping them return to work after career breaks, allowing more flexible working options, and supporting women into higher paid, higher level roles.”

“The number of women in executive level positions remains far too low.”

“Keeping women working, and allowing them to reach their full potential will fire up productivity levels and pay dividends.”

Alison is the Digital Content Editor for WeAreTheCity. She has a BA Honours degree in Journalism and History from the University of Portsmouth. She has previously worked in the marketing sector and in a copywriting role. Alison’s other passions and hobbies include writing, blogging and travelling.
Previous PostAlec Baldwin admits he has been ‘very sexist’ and ‘bullied women’ at workNext PostIvanka Trump: “Workplaces need to respect women’s values”