Chairman (sic) of the RSA

(Royal Society for the encouragement of Arts, Manufactures and Commerce)

Women in the city, tend to be encouraged to have a five year plan or certain goals to aim at, so it is refreshing to find someone, with different aims, and reassuring for those, who don’t have the expected aims and goals.  Every one is different.  Perhaps the arts is a different field.

“My ambition as a child was I wanted to be a ballet dancing policewoman. I’m still not sure what I’m going to be when I grow up. I had not really realized that that was a quality in me.  I tend to stop a job before I’ve got something else to go to.

“Over my career I’ve developed an understanding of the complexity of human relationships and the desire to engage with both your own creativity and the creativity of others, and how it enables you to think through your life and the world around you.“

Vikki was previously at the RSC, Royal Shakespeare Company, and Joint Chief Executive of the Royal Court Theatre, At both the RSC and the Royal Court she was responsible for their two, multiple million pound capital projects, which transformed two iconic theatre buildings in London and Stratford Upon Avon. Currently chairman (sic) at the RSA, she talks about her aims in an interview with CityEye.

“I’ve always believed that you come out of whatever training you’ve done, and you’re wandering about feeling utterly as if you don’t know who you are or what you’re about, and somebody, somewhere believes in you and recognizes something in you you and gives you that break. Everyone has one of those. That’s the difference you can make in somebody else’s life.

“I had one of those and that was the serendipitous thing that set me on my path to stage management and running organizations. and she’s still a friend to this day. We were both at the Barbican, we were both plotting to get out, when told her I wanted to go into administration. Later she rang me up and she had raided the petty cash tin.  She had enough money to pay me for 6 months to come in as assistant administrator. That was the jump out of stage management into administration.“

“It was fantastic working with Stephen Daldry, who is an amazing artistic director. It was a crazy time because we were young, because we were making it up as we went along, because we were pretty wild and free. We were knocking down a national institution, one of the first ones to do it. We got our lottery money from the Arts Council, because they really didn’t know what they were doing. It was the first time I worked as a couple, to make the new vision for the place.“

While Vikki’s career seems to point to Leadership, in fact she believes in team work, every thing she does is about working in a team collaboratively, the thread that runs through her career.

“I like to work collaboratively, I don’t want to do it on my own, it’s horrible, horrible. Why would you want to do that?”

“Leadership, that comes later. doesn’t it.  At the beginning you don’t think about leading a team. As a stage manager, you are very people oriented , very team oriented, but you want to take responsibility for something. The guy doesn’t get to die in act 3 because the dagger wasn’t there.  From the beginning you’ve got to take quite a lot of stress,and strain because the actors are the ones who bare their souls on stage and you get quite a lot of flack. You’ve got to take it, and know it’s not personal and move on.

“My most influential achievement was probably The Warwick Commission on the future of cultural value, which I chaired. That report was terrific, because it was really significant, got a huge amount of coverage. It did influence government policy and critically influenced the creative industries.  It wasn’t as flattering towards the creative industries as it might have been, but they need to get with the program, especially diversity and inclusion.”

The value of the arts.

“Where the disconnect still seems to occur is between that output of our brilliance, and input of tourists, people moving about at night, night time economy, wine drinking, etc. Cities that have nothing are not safe places , cities that have lots, are a lot safer at night.   So you can really start to talk abut why the world is a better place, quite instrumentally, through what it is that you’re doing.  If you start talking about 77 billion pound of economic benefit to the UK then you’re having a different kind of conversation with a politician.”

Mountview Drama Academy in Peckham is a very good example of how building projects shove organisations forward, but they are only a mechanism. That’s why now I’m putting my voluntary energy into projects that shape change, how we approach this idea of how do you unlock people’s creativity to the benefit of society.

“The building we’re creating will be a meeting place for students at the top of their game who want to enter into the creative industries, creative industry practitioners, with spaces for them to work and develop their craft within the building, and the local community of life long learners.  The building is to create a forum, a kissing point, between students, creative practitioners and community, those three groups of people. The interrelationships which occur make the building really interesting, dynamic and diverse. The end has got to be about increased public engagement in creativity. That’s what it became about in my career, that’s the thread that links throughout the strands of my career. That’s what I became about in my three chairmanships. But I didn’t think about any of those things when I started.”

More of the interview with Vikki Heywood can be found at ionthecity.com

City Eye became interested in Overlooked and Overshadowed women, both in contemporary times and through out history. The former would include the women passed over for the Nobel in favour of their male colleagues. The later would be the wives of famous men, such as Mrs. Mandela. Her study of women written out of history, led her to interviews with interesting and inspirational women, (and some men). Extracts will be published in the articles. In no way is this men versus women, as to who is better. Simply that an overly macho, military, testosterone fueled environment, mainly men, needs the balancing attributes, often, though not exclusively, assigned to women: caring, conciliation, communication. Find out more: City Eye Blog ©christina ionthecity.wordpress.com
Previous PostInspirational Woman: Paula Murphy | Global Head of Marketing & Communications at ARCADISNext PostWhy women entrepreneurs should be celebrated

Our top inspirational interviews for November 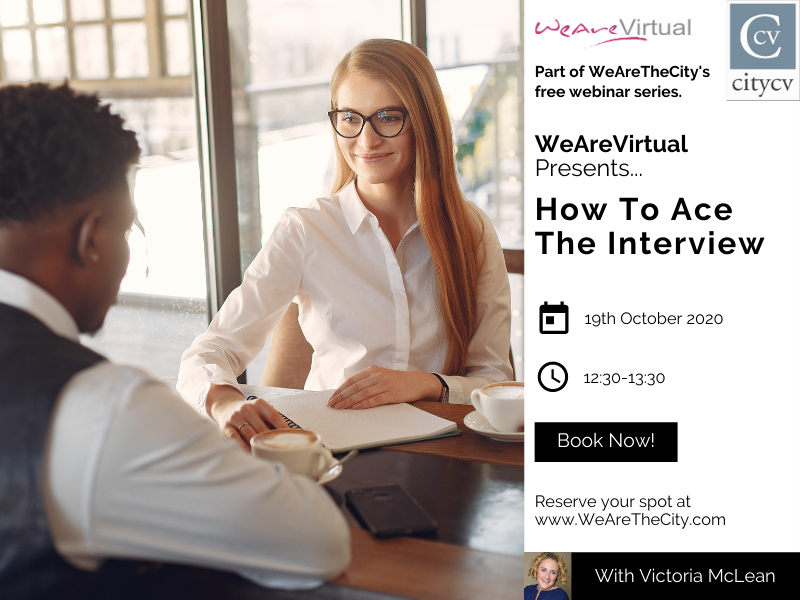 5 tips to boss your interview during lockdown