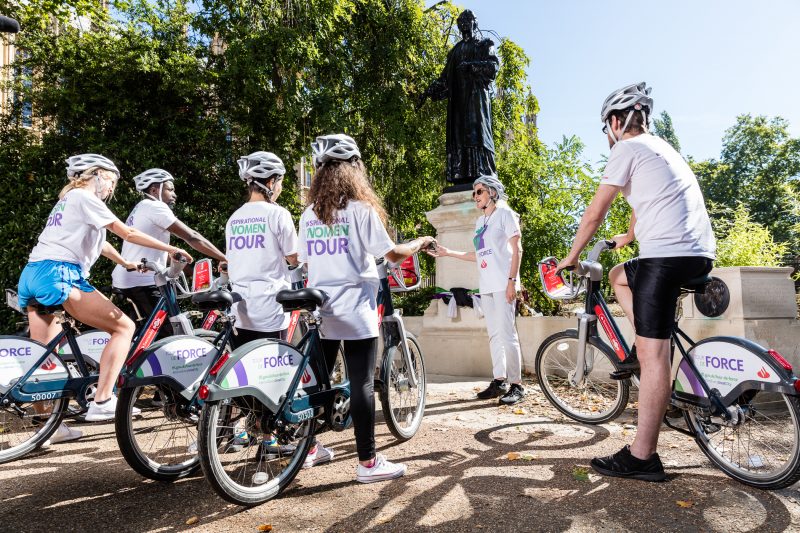 Launched to celebrate this year’s centenary of the first women winning the right to vote in the UK, the free Tour de Force experience sees participants take Santander Cycles on a guided ride across London, where they will hear the stories of women from all walks of life, whose amazing achievements have helped to shape the city, the nation and the world.

Among the many sights visited on the Tour De Force will be the new statue of suffragist Millicent Fawcett (the first female statue in Parliament Square), the memorial for WW2 undercover operative Violette Szabo, and iconic buildings designed by female architects such as Zaha Hadid’s spectacular Serpentine Sackler Gallery.

The carefully crafted route begins at Kensington Gardens and ends at Waterloo Place at the statue of Florence Nightingale, with commentary on the landmarks visited provided by a professional tour guide. Participants will ride Santander Cycles which have been given a special make-over for the tour, using the suffragette movement’s iconic colours of purple, white and green and displaying #BehindEveryGreatCity in support of the Mayor of London’s year-long women’s suffrage centenary campaign.

Speaking about the campaign, three-time World and Olympic champion and Santander ambassador, Dame Jessica Ennis-Hill said, “Santander’s Tour de Force is a brilliant way to find out more about some of the incredible women who have made waves across our history.”

“I hope the Tour can help inspire women everywhere to become the leaders and innovators of tomorrow in their chosen field – whether it’s finance, science, politics, the arts or sport.”

Susan Allen, Head of Customer Interactions at Santander added, “At Santander we are committed to championing gender equality and supporting women everywhere to realise their full potential.”

“London is a city rightly famed for its fascinating history and rich culture, but many of the women who played a central role in shaping it are not as well-known as they should be.”

“We wanted to shine a light on some of the women whose amazing achievements have helped to shape our society and blazed a trail for gender equality.”

Alison is the Digital Content Editor for WeAreTheCity. She has a BA Honours degree in Journalism and History from the University of Portsmouth. She has previously worked in the marketing sector and in a copywriting role. Alison’s other passions and hobbies include writing, blogging and travelling.
Previous PostThe search is on for inspirational business women for the Innovate UK Women in Innovation Awards 2018Next PostBritish girls forced into marriage are victims of immigration incompetence