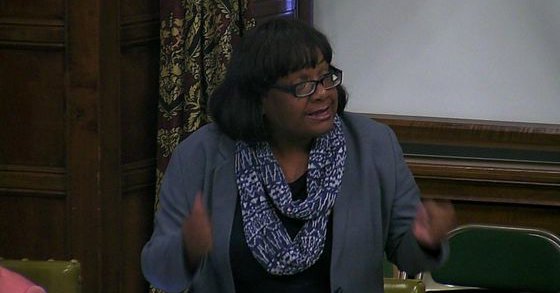 Shadow Home Secretary Diane Abbott has spoken out about the ‘mindless’ abuse she receives through email and social media.

Speaking during a Westminster Hall debate on the abuse candidates get during elections, Abbott proceeded to detail threats made to her life, adding that the attacks had gotten worse over the years.

Abbott said she had received rape and death threats, and several messages described her as an “ugly fat black bitch” and a “n*****”.

“And just to outline I’ve had death threats, I’ve had people tweeting that I should be hung if ‘they could find a tree big enough to take the fat bitch’s weight.'”

She continued, “There was an EDL affiliated Twitter account #BurnDianeAbbott, I’ve had rape threats, described as a pathetic, useless fat black, piece of shit, ugly fat black bitch and n*****.”

The MP for Hackney North and Stoke Newington acknowledged that male politicians suffer abuse too, but said that it was ‘much worse’ for women.

She added: “I think the rise in the use of online has turbocharged abuse because 30 years ago, when I first became an MP, if you wanted to attack an MP you had to write a letter.”

“Now they press a button and you read vile abuse which 30 years ago people would have been frightened to even write down.”

An investigation has been launched into the abuse of parliamentary candidates after a wave of hateful and intimidating messages were posted during the general election.

Prime Minister Theresa May asked the Committee on Standards in Public Life to assess the abuse, and come up with ways to tackle it in the future.

May said: “I have been horrified by stories from colleagues about the scale and nature of the intimidation, bullying and harassment they suffered during the general election campaign.”

“Robust debate is a vital part of our democracy, but there can be no place for the shocking threats and abuse we have seen in recent months.”

“We must all work together to banish this behaviour, and I would urge MPs and candidates from all parties to report their experiences to this review so we get the fullest possible picture – and can take the action required to stamp it out.”