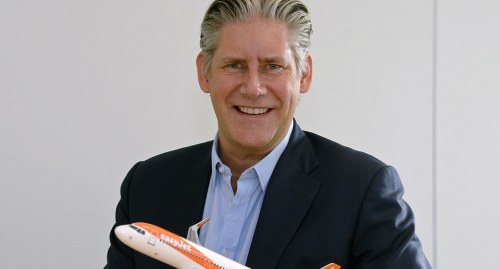 Lundgren, 51, who has never run a major company before, will earn £740,000, with the possibility of earning an extra £1.5 million in bonuses and another £1.9 million in long-term share rewards.

The move comes as campaigners promote Equal Pay Day – marking the day that women effectively work for free because on average they earn less than men.

Across the UK, people shared championed gender equality, including BBC staff who wore ‘equal pay’ t-shirts. The Women’s Equality Party also launched a campaign encourage women to turn on their out of office emails to raise awareness of the day.

EasyJet have appointed Lundgren to replace McCall as she becomes the first-ever female Chief Executive at ITV. Lundgren, who was previously the deputy chief executive of TUI, is expected to start his role in December.

Speaking about Lundgren’s appointment, Sophie Walker, leader of the Women’s Equality Party said, “This is a classic example of a less experienced man being more highly valued than the experienced woman he is replacing, for no other reason than the fact that he is a man.”

“This is why we are campaigning for equal pay, because it is unfair that women have to fight all the time for recognition, while it is handed on a plate to men.”

A spokesperson for EasyJet said, “Johan’s basic salary is broadly in line with our current chief executive and the structure remuneration package is identical.”

Alison is the Digital Content Editor for WeAreTheCity. She has a BA Honours degree in Journalism and History from the University of Portsmouth. She has previously worked in the marketing sector and in a copywriting role. Alison’s other passions and hobbies include writing, blogging and travelling.
Previous Post#MeToo: Hundreds march in Hollywood against sexual harassmentNext PostChurch of England schools told that children should be allowed to experiment with gender