On Sunday, Emma Watson became the first recipient of a gender-neutral acting prize at the MTV TV & Movie Awards. 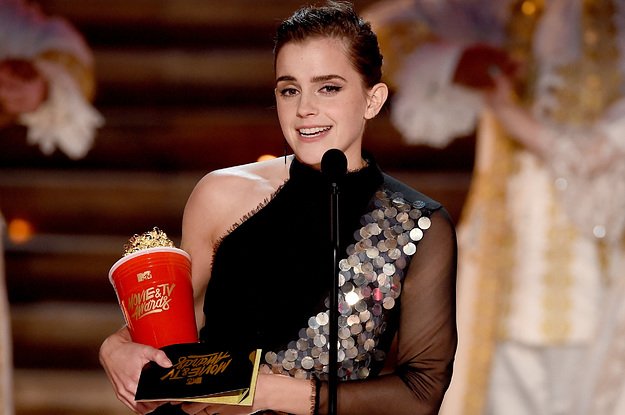 She won the award at the Shrine Auditorium in Los Angeles for her starring role as Belle in Disney’s Beauty & the Beast.

The MTV TV & Movie Awards follows the Grammy Awards in introducing gender-neutral categories, after the music awards merged the male and female categories in 2011.

In her speech, Watson said:

“MTV’s move to create a genderless award for acting will mean something different to everyone,”

“To me, it indicates that acting is about the ability to put yourself in someone else’s shoes and that doesn’t need to be separated into two different categories.”

Watson added: “Empathy and the ability to use your imagination should have no limits.”

“This is very meaningful to me, both to be winning the award and to be receiving it from you in such an inclusive, patient and loving way.”

Bill Condon, the movie’s director, said: “Thank you to the audience who embraced this movie so much but especially to the women because women are proving that they are a huge and powerful audience and that’s going to change the movie business.”

Other winners on the night included Moonlight’s Jharrel Jerome and Ashton Sanders, winning best kiss for a same-sex kiss.

Sanders said: “This award is bigger than Jharrel and I. This represents more than a kiss. This is for those who feel like the others, the misfits – this represents us.”