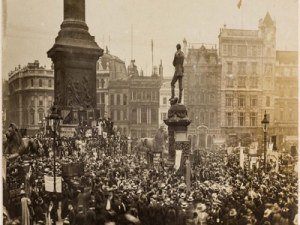 100 years ago, a majority of women in Britain won the Vote. Who was responsible – the government or the people? Was it the victory of a united

100 years ago, a majority of women in Britain won the Vote. Who was responsible – the government or the people? Was it the victory of a united or a divided movement? What forms did the struggle take? Did men play a role too? What happened after 1918? Who continued the struggle for full equality?

Through an interactive classroom session followed by a guided walk, David Rosenberg explores the complex and conflicted history of women’s battle for equality and political rights, how it was connected to the wider struggle to advance democracy, the birth of feminism, and women’s fights for equality and dignity in the workplace

David Rosenberg is an educator, writer, teacher trainer and tour guide. He taught in an inner London primary school for 22 years, and in recent years has taught adults through Conway Hall, City Lit and the Bishopsgate institute, and organised day events on historical themes at the London Metropolitan Archives. He has led guided walks on London radical history since 2007.

We are committed to promoting inclusive practice. The classroom sessions for this course will take place on the ground floor, so it will be fully accessible for wheelchair users or people with limited mobility.