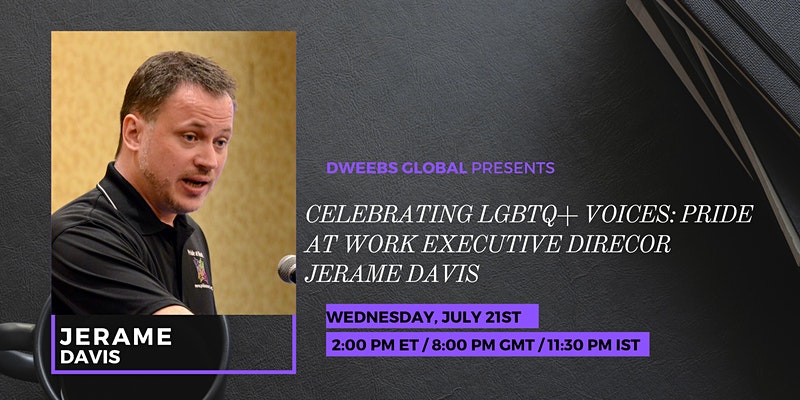 This July, join us in celebrating LGBTQ+ voice and Executive Director of Pride at Work Jerame Davis. Jerame has more than 12 years experience in non-profit leadership and political communications, coupled with web development and social media expertise.

Have you ever wanted to hear about what full equality looks and sounds like? Or are you just curious about what Pride at Work does? This event is for you!

This event is a must-attend for anyone interested in LGBTQ+ rights. The best part? A live off-the-record Q&A with Jerame Davis himself!

About Pride at Work:

Pride At Work is a nonprofit organization that represents LGBTQ union members and their allies. We are an officially recognized constituency group of the AFL-CIO (American Federation of Labor & Congress of Industrial Organizations) that organizes mutual support between the organized Labor Movement and the LGBTQ Community to further social and economic justice. From our national office in Washington, DC, we coordinate and support more than 20 Chapters across the country.

We seek full equality for LGBTQ Workers in our workplaces and unions. We work towards creating a Labor Movement that cherishes diversity, encourages openness, and ensures safety & dignity. We aim to educate the LGBTQ Community about the benefits of a union contract for LGBTQ working people, and to build support and solidarity for the union movement in the LGBTQ community.

We organize in the spirit of the union movement’s historic motto, “An Injury to One is An Injury to All.” We oppose all forms of discrimination on the job and in our unions based on sex, gender identity and expression, sexual orientation, race, national or ethnic origin, age, disability, religion or political views.