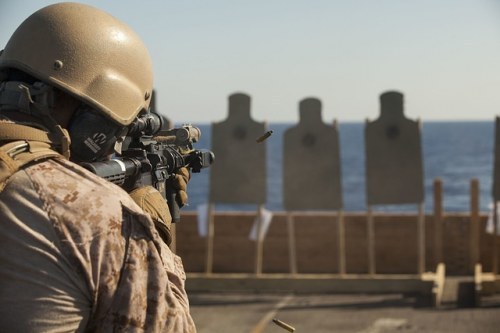 A woman, whose name has not been disclosed, is set to become the first female infantry officer in the US Marine Corps.

The woman will be the first ever to complete the gruelling training course in the Marine’s 242-year history.

The female officer was entitled to take part in the training after the Pentagon opened all jobs to women in December 2015.

The training course was opened up to women in 2012 on an experimental basis, but it was closed in 2015. During the time it was opened, 32 women attempted the course, but all failed to graduate.

Training to join the Marine Corps remains one of the toughest in the US military. Candidates are required to carry equipment weighing 152 pounds, take part in day-long endurance tests and obstacle courses, and show their skills in assembling weapons and navigating the land.

According to The Washington Post, around ten per cent of applicants fail on the first day.

It is now believed that the new officer will be leading a platoon of 40 soldiers, once she graduates.

The US Marine Corps confirmed the news. In a statement given to CNN, the US Marine Corps’ Training and Education Command said, “The female officer within Infantry Officer Course has completed all graduation requirements and is scheduled to graduate with her peers on 25 September.”

Speaking to The Washington Post, Kyleanne Hunter, a member of the Pentagon’s Defense Advisory Committee for Women in the Services and former Marine Corps helicopter pilots, said, “I think people are rightfully excited.”

“But at the same time, too much attention can take away from her operational requirements.”

“Her first challenge is going to be to remain anonymous, for lack of a better term, and just do her job.”

Alison is the Digital Content Editor for WeAreTheCity. She has a BA Honours degree in Journalism and History from the University of Portsmouth. She has previously worked in the marketing sector and in a copywriting role. Alison’s other passions and hobbies include writing, blogging and travelling.
Previous PostPetition to save Uber receives over 700,000 signatures as 40,000 jobs affectedNext PostLabour calls for women to have earlier retirement option
X