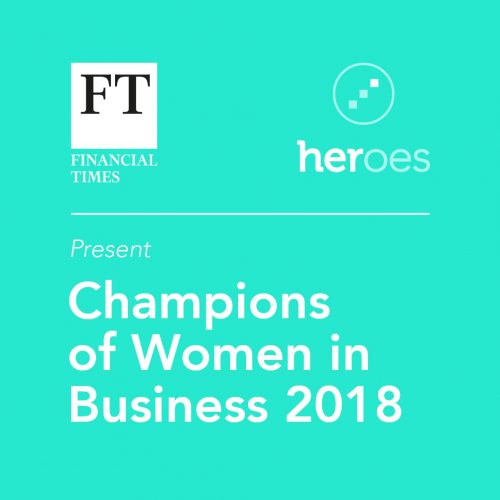 The FT & HERoes Champions of Women in Business lists were announced today, celebrating role models who are driving the female talent pipeline in business.

The lists celebrate exceptional business leaders of all genders across the world who are committed to promoting gender diversity and inclusion in the workplace.

Founder of INvolve and HERoes, Suki Sandhu, said, “These lists have been created with one aim – to create gender parity in workplaces across the globe.”

“The role models we’re recognising aren’t just those who have achieved success themselves – they’re those who are committed to lifting others with them as they climb, and ultimately fueling the female talent pipeline.”

“As evidenced by the recent reporting of gender pay gap data across the UK, the quest for workplace gender equality is not complete.”

“All of our champions are inspiring the next generation of female talent who will go on to obliterate the glass ceiling.”

“Ultimately, through these lists we hope to encourage individuals and businesses to stand up and work together to drive change not just in workplaces, but across society as a whole.”

Speaking of her win, Trenowden said, “I am both humbled and delighted to be included in a list of so many inspirational men and women, all of whom are doing a great deal to empower and promote women in business.”

“Recognition like this helps to keep gender diversity near the top of the agenda.”

“I believe that we all have a responsibility to lead by example and to create truly inclusive workplace cultures where everyone can thrive and succeed.”

“I’m encouraged that this is becoming a mainstream issue and that we are making progress, but there is still much more to do!”

Alison is the Digital Content Editor for WeAreTheCity. She has a BA Honours degree in Journalism and History from the University of Portsmouth. She has previously worked in the marketing sector and in a copywriting role. Alison’s other passions and hobbies include writing, blogging and travelling.
Previous PostNominate your flexible superstars for the Timewise Power 50Next PostDay Four: Top tips to reduce your risk of breast cancer | Breast Cancer Prevention Week