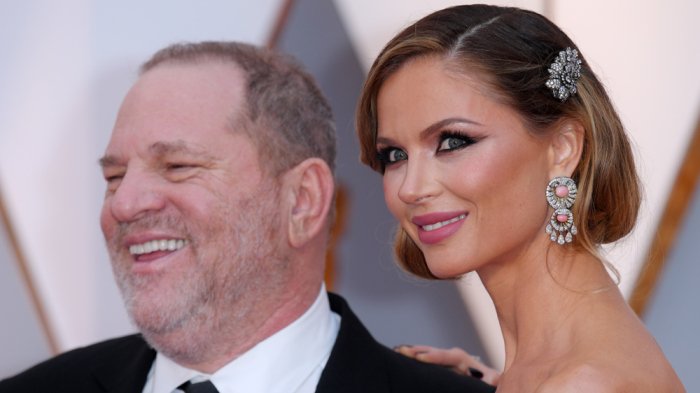 The British fashion designer, who has been married to Weinstein since 2007, released a statement to People, stating:

“My heart breaks for all the women who have suffered tremendous pain because of these unforgivable actions. I have chosen to leave my husband.

“Caring for my young children is my first priority and I ask the media for privacy at this time.”

Her announcement comes after Weinstein reportedly flew to a a European private rehab for sex addiction and anger management. The 65-year-old Hollywood producer has now been accused of rape by three other women in an expose by the New Yorker magazine.

And now Hollywood actresses Gwyneth Paltrow and Angelina Jolie have added further allegations. Paltrow revealed that the incident took place after Weinstein hired her for a lead role in the adaptation of Jane Austen’s Emma. Before filming, the actress was asked to visit his suite at the Peninsula Beverly Hills hotel for a meeting, Paltrow told the New York Times.

She said Weinstein then requested that they ‘mutually massage’ each other. Paltrow said of the incident: “I was a kid, I was signed up, I was petrified. I thought you were my Uncle Harvey.”

Paltrow refused, but told her then boyfriend Brad Pitt who later confronted and threatened Weinstein. The actress said Weinstein was furious and she thought she would be fired from her first movie role.

She said: “He screamed at me for a long time. It was brutal. I was expected to keep the secret.”

“We’re at a point in time when women need to send a clear message that this is over. This way of treating women ends now.”

Angelina Jolie said Weinstein made sexual advances to her in a hotel room during the release of Playing by Heart, which she said she immediately rejected.

Jolie told the New York Times: “I had a bad experience with Harvey Weinstein in my youth, and as a result, chose never to work with him again and warn others when they did. This behaviour towards women in any field, any country is unacceptable.”

Since the allegations, the Obama’s, Hillary Clinton and Leonardo Di Caprio have all released statements condemning the producer. However, actress Lindsay Lohan took to Instagram praising the Hollywood mogul, asking people to “leave Harvey alone”.

Weinstein previously claimed that wife Georgina Chapman was standing by him, and has vehemently denied many of the allegations, saying that all his sexual relations were consensual.

Previous Post09/11/17: Voice At The Table Evening Workshop – Navigating the Organisational Landscape: Getting Started With Office PoliticsNext PostUnique career perks to look for in 2018