0
You have 0 items in your cart
Go To Shopping
Home > News > Current Affairs for Women > Girls continue to outperform boys at GCSEs, as gap widens to 11 year high

Girls are continuing to outperform boys at GCSEs, with gap between the number of boys and girls getting A* – C grades at an 11 year high.

Figures released by the Centre for Education and Employment Research (CEER) reveal that 73.1 per cent of girls have achieved a grade C or above, compared to 64.3 per cent of boys.

The percentage of girls receiving a grade A also outstripped boys, with 8 per cent receiving the top grade compared to 5.2 per cent of boys.

However GCSE results, announced today, show that across the board, grades are falling. The number of students resitting their English and maths GCSE was at its largest – an increase of 26 per cent on last year.

This is perhaps due to newly introduced government measures which requires all students who do not receive at least a grade C in maths and English to continue studying for two years or until they have reached this level.

Students collecting their results today will be the last to be marked under the traditional method. Under government reforms, next year’s students will be marked numerically from a scale of nine to one.

Professor Alan Smithers, director of Buckingham University’s Centre for Education and Employment Research said, “The results this year will be very close to what they were last year, but the increase in people repeating maths and English could lower the top grades slightly because candidates are more likely to be aiming for a C.”

“Girls are a long way ahead of boys, doing better in 47 of the 49 subjects and being over 15 percentage points ahead in English.”

Michael Turner, director general of the Joint Council for Qualifications said, “There is significant movement in this year’s entries, which impacts on results and creates a very complex national picture.”

“We have seen shifts not only between subjects, but also across qualifications and year groups.”

“This is driven by several factors, including performance measured and re-sit policies in England.”

Previous PostWomen are revolutionising the way we listenNext PostTop tips: How to effectively work outside

GCSE Results Day: What are the next steps? 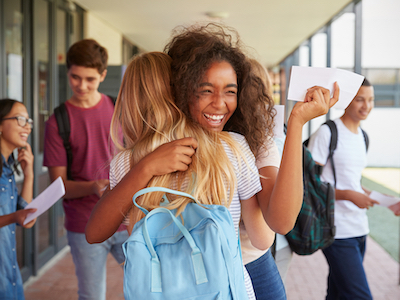