In Iceland’s national elections, which took place over the weekend, female candidates won a record thirty seats, making up almost half (48%) of the 63 seats.

Iceland now has the “most equal Parliament in the world” without a quota system, according to the country’s Ministry for Foreign Affairs. The Pirate Party – an anti-establishment group made up former hackers and activists also gained 10 seats this election. The Pirate Party is lead by Birgitta Jónsdóttir, and the four-year-old party stands for online freedoms, direct democracy and transparency.

Last week, the World Economic ranking of nations by gender gap placed Iceland at the number one spot, showing that Iceland leads the way for Gender equality. The rankings showed a divide of just 12.6% between sexes across health, education, economic participation and opportunity, and political advancement.

This means that Iceland now leads its peer Nordic nations—Denmark, Sweden, Norway, and Finland—in parliamentary equality, according to the Inter-Parliamentary Union. Its also beats the worldwide average for percentage of women in upper and lower houses—22.8%, trouncing the USA’s 20% share.

After this weekend’s results, Iceland falls behind only Cuba, Bolivia, and Rwanda in the IPU’s global ranking of female representation in parliament.

Iceland’s Parliament is called the Althing. According to final election results quoted by Iceland Review, five parties drew support of more than 10%:

The current Prime Minister, Sigurdur Ingi Johannsson resigned after his Progressive Party finished in forth. Iceland now faces the task of assembling a three-party coalition.

However, despite advocates praising the result of Saturday’s election, gender pay equality is still a problem in Iceland. Last week, activists urged female workers to leave work at 2:38 p.m, to reflect the time after which they are working for free, in comparison to their male co-workers.

Previous PostSports governing bodies could lose funding if diversity does not improveNext PostFeeling the strain? Seven ways to deal with stress 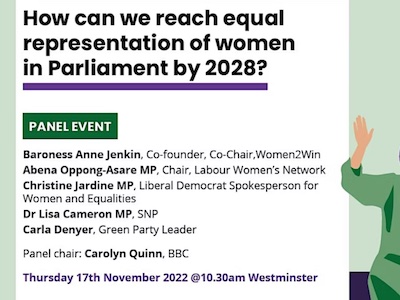