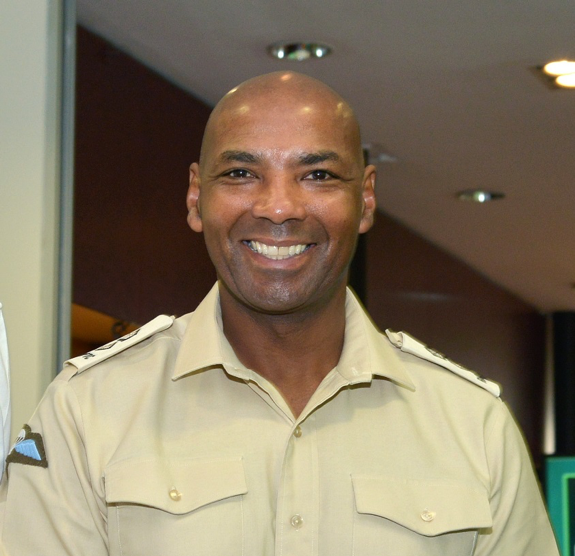 Lieutenant Colonel Sulle Alhaji was born in Newcastle where he spent his childhood.

At 13 years old he joined the Army Cadet Force, at 16 he joined the Royal Marine Reserves.  In June 1978, he joined the Parachute Regiment and was posted to the 3rd Battalion the Parachute Regiment located in Osnabrück, Germany.  In 1979 he deployed to Armagh, Northern Ireland.  In 1982 he deployed to the Falkland Islands on OP CORPORATE with B Coy where they captured Mt Longdon.  In 1984 he served six months on an operational tour in the jungle of Belize protecting the border.

In 1986 he transferred into the Royal Army Physical Training Corps (RAPTC) and served in various locations, of which highlights are, 7 Parachute Regiment Royal Horse Artillery and as the Chief Instructor at the Army School of Physical Training in Sennelager, Germany.  He commissioned in January 2000 and was posted to the Army Training Regiment Pirbright, then attended Junior Commend Staff College in preparation for a Staff Officers appointment at Headquarters Initial Training Group.  On promotion to Major he served in various staff appointments including tours in Germany and Canada, where he was responsible for the delivery of Adventurous training for over 5000 troops per annum.  In 2015 he was offered a new Full Time Reserve Service assignment in Army Headquarters, he was promoted to Lieutenant Colonel and responsible for designing the assurance process for all physical development in the Army.  In 2017, he took on his current assignment as director of the Army Youth Outreach Team, responsible for identifying opportunities to engage with diverse youth communities across the country.

Lieutenant Colonel Alhaji is a very keen mountain biker and a qualified mountain bike tutor.  He is also a fully qualified bike mechanic.  In his spare time, he relaxes by making furniture and bespoke wooden items.

He is happily married to Nicky, no children.  He provides carer support for Nicky as she has Multiple Scleroses.

I run the Army Youth Outreach Team, which is part of the Army Engagement Group. This is a diverse group specifically selected by myself to engage with the BAME community, hence we reflect diversity. Also, we have an annual D&I meeting headed up by the most senior Generals in the Army. Each unit must have a D&I representative and last year there was approx 500 attendees. The message I deduced was, the Army takes D&I very seriously.

It creates an effective working environment where women are afforded the same opportunities as men. I believe, when there’s gender equality in the workplace, it encourages staff to focus more on achieving the organisations output targets and goals. Essentially, getting the job done. Females can also create a balanced working environment as they tend to have more compassion and emotional intelligent, which can defuse an alpha male aggressive environment.

In the Army, we recruit from society and the younger generation are having a positive influence which can rub off on the older generation and change attitudes particularly of those who may find it difficult discussing gender equality due to historical hang ups.

Tell them the obvious benefits, such as:

I currently mentor 3 now of which one has psychological issues. In the past I’ve mentored several females.

Have you noticed any difference in mentoring women – for example, are women less likely to put themselves forward for jobs that are out of their comfort zones or are women less likely to identify senior roles that they would be suited for?
From my experience women ask more relevant questions and once they get it they either contribute by making improvements. I’ve mentored quite a few women who have tremendous drive and determination hence they get promoted for their merit and professionalism. I currently have one female who thrives on high pressured and physically challenging environment and she always achieves the outcome.