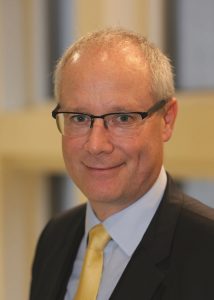 Stewart Carmichael, Chief Technology Officer at Schroders, has more than 25 years’ experience in the investment management and banking industry.

Since joining the Group Management Committee at Schroders, Stewart has placed a focus on transformation and innovation. Before joining Schroders Stewart was CTO for JP Morgan Corporate & Investment Bank in Asia, and held various senior leadership positions during 16 years at Merrill Lynch.

Stewart has lived in New York, Singapore and Hong Kong. He’s currently based in London.

I’ve certainly witnessed the advantages of a diverse workforce of all kinds in my career. Having worked extensively in the UK, US, and Asia, I’ve seen how diversity in different contexts leads to a greater diversity of thought – and that is always a positive thing in any business. My mother was my role model in choosing a career in IT. She worked in the IT industry from the 70s to the 90s at companies such as ICL and Marconi leading large scale projects.

I’ve always felt that as a man, I’ve been welcomed into the gender equality conversation. Personally, I feel that being part of the dialogue helps me better understand the challenges that need to be overcome.

No. Until we have more of a gender balance at all levels, these groups or networks will help women to access peer support. In my experience, they don’t prevent men from actively engaging in the dialogue. On the whole they help men to be aware of the issues and understand their role in addressing the challenges.

Businesses can explicitly invite men to join the gender debate as peers and supporters. Men in senior positions also have a role in leading the way through visible support and participation. I’m sure many men would be proud to support daughters, sisters or other female family members, given the opportunity.

I believe in the concept of ‘manager as a coach’ and the agile practices that lead to the ‘servant leader’. Both of these approaches emphasise coaching and mentoring. I have previously had both formal and informal mentoring relationships with women and continue to give advice to past employees.

I would say that academic studies have shown this to be the case, but I would also say from experience that I’ve seen women often approach problems in different ways to many men. Businesses benefit from different approaches to problem-solving, which is one reason why we should seek a more diverse workforce.

0Shares
Chief Technology OfficerCTOHeForSheSchrodersStewart Carmichael
Previous PostThe one thing that businesses need more than anything else at the moment – and how to get itNext PostNew international podcast aims to smash barriers and pave the way for women’s leadership, career success and innovation