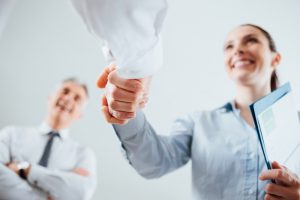 After spending hours perfecting your job application, receiving an invitation to an interview will typically provoke two emotions: a brief moment of relief, then a slow-burning sense of panic.

It’s true, there’s a lot that you need to prepare for, but we’ve broken it down into five straightforward steps to transform how you impress in an interview, in order to catapult you to the next stage of the process.

It’s widely believed that you’ve got just seven seconds to make a first impression on someone, so set yourself up for success by dressing smartly. It’s not always easy to decide what to wear for a job interview, but usually there are two ways to go: smart or smart-casual. Even if you already know that everyone else in the office wears blue jeans and trainers, this is not the time to try and blend into the crowd.

Be posed and prepared

Ideally, arrive ten minutes before your interview is scheduled to begin. As a general rule, if you do arrive earlier – perhaps to allow time to compose yourself or avoid the risk of a delayed train – then spend some time at a nearby coffee shop or waiting in your car. While you’re waiting, you may want to familiarise yourself with your notes and ensure you have any printed documents (such as your CV and cover letter) handy. Alternatively, mentally run through your elevator pitch – a short introduction to who you are and what you do – which will often be the answer to the first question you’re asked.

Don’t robotically talk about yourself

It sounds contradictory, right? Hear us out on this one. It’s easy to get caught up in a script that you’ve rehearsed countless times the night before – but if you do, you’ll likely spend the entire interview talking about yourself. Instead, talk about what you could bring to the company. Where possible, draw on past experiences and anecdotes to help the interviewer envision working with you.

An interview is a chance to sell your USPs, not sit in a chair answering questions. So, when the floor is opened up for you to take the lead, seize it and turn the tables in your favour. Avoid asking questions about the salary or employee benefits, and instead steer the conversation towards how you would fit into the company. There a number of useful questions to ask at the end of your interview , such as how your performance will be measured or what you could expect to be doing on a day-to-day basis.

If you’ve dressed the part, prepared yourself and got a bank of questions ready to ask the interviewer, it’s time to take a step back and relax into the interview. That’s easier said than done, but the most successful candidates are usually the ones who don’t treat the interview process like an interrogation. Having an open, authentic conversation is the key to building rapport with your interviewer. Try putting yourself in their shoes… Wouldn’t you prefer to see how the candidate would naturally act around their colleagues?

Sometimes, trying to remember all the advice you’ve been given can seem overwhelming and leave you scared that you’ll make the wrong move. However, if you’ve made it to the interview stage then you’ve already taken a huge leap in the right direction. Now, you’re simply securing your footing.