0
You have 0 items in your cart
Go To Shopping
Home > News > Current Affairs for Women > “I’m here to say, girls can do that” | Charlize Theron talks feminism at Comic-Con 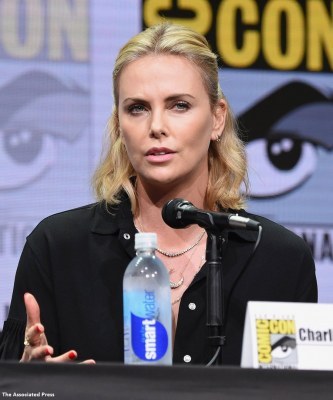 Actress Charlize Theron has spoken out about women being the hero and being “bad-ass.”

Speaking at Comic-Con, promoting her new spy thriller, Atomic Blonde, Theron said, “I wanted to make this movie and let it be as bad-ass as this and not have anybody come up to us and say, a girl can’t do that.”

“That was important to me.”

She also implored more people to go and see movies with a female lead, saying, “I always say to studios: ‘make more female-driven movies and they say that they would if people go and see them.”

“Go and see those movies.”

It is not the first time that Theron has been outspoken about women in the film industry. Earlier this month, Theron said she was “ashamed to be part of the Hollywood industry” and branded Hollywood executives as “caveman-like” for rarely allowing women bigger opportunities.

In 2015, she also spoke about how women are often pigeonholed within the film industry. Speaking to The Guardian, she said, “You’re either a really good mother or you’re a really good hooker.”

“Women thrive in being many things.”

“We can be just as dark and light as men.”

In an ELLE UK interview, Theron also lamented why we need to teach young girls what feminism really means. She said, “…Girls need to know that being a feminist is a good thing.”

“It doesn’t mean that you hate men.”

“If you are doing the same job, you should be compensated and treated in the same way.”

Equal pay being something that Theron clearly believes in, it is reported that the actress insisted she was paid the same as her co-star, Chris Hemsworth for her role in The Huntsman.

Alison is the Digital Content Editor for WeAreTheCity. She has a BA Honours degree in Journalism and History from the University of Portsmouth. She has previously worked in the marketing sector and in a copywriting role. Alison’s other passions and hobbies include writing, blogging and travelling.
Previous PostFemale artist turns stretch marks into works of artNext PostCara Delevingne meets inspirational women in docu-series with Puma