Anna Blackburn, who has recently been promoted to Managing Director (from CEO) of Beaverbrooks, started her career as a trainee at the jewellers. 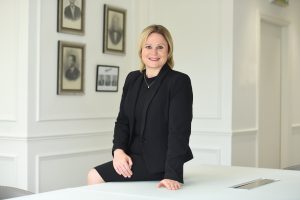 Anna’s appointment makes her only the second-ever non-family member to sit on the board in the company’s 100-year history.

Anna joined the 100-year-old family business as a graduate trainee in 1998, and after working her way up within the business, accepted the role of chief executive officer in 2013. This appointment was significant on two levels – Anna was the first female CEO and the first non-family member to take up the role.

Celebrating our 100-year anniversary this year, I’m proud to say that we’ve just come off the back of our five most consecutive profitable years. We have also been named the 10th Best Company to work for in the UK and best workplace within the retail community. Beaverbrooks’ Chairman, Mark Adlestone OBE DL, and I have also been recognised as the UK’s Best Leaders in the Sunday Times Best Companies Awards 2019, which is just incredible. In fact, we are the only company in the Best Companies history, to have consistently achieved a three-star accreditation – reflecting our people’s exceptional engagement levels.

On a personal level, family is incredibly important to me which is one of the main reasons why we live just a short distance from the Beaverbrooks head office in Lytham St Anne’s. I have two children and an incredibly supportive husband, but balance is really important – I work hard but always ensure I have time for my family. I’m a true believer in the idea that you get out what you put in and I make sure that’s something that carries through in both my work and private life.

No not really. I have always loved retail so I suppose from that perspective I made a decision fairly early on that retail was the right path for me, I just didn’t know how that might manifest itself. I was attracted to Beaverbrooks as a family business which focussed on internal promotion and charity. I’d just returned from travelling and volunteering in Africa so Beaverbrooks felt like a good fit for me. I joined looking to be a store manager and achieved that after two years.

I actually met my husband at Beaverbrooks and what’s really interesting, is that in those first few weeks working together, he told me that I would run the company one day. I thought he was crazy at the time but when I got offered the job, it felt like an ‘I told you so’ moment.

Yes of course. I’ve had to work hard for everything I have achieved but I think that’s a great value in life and is something I instil in my own children.

One of the biggest challenges I’ve faced in my career was actually when I was promoted to the position of CEO in 2013. Taking the helm of a successful 95-year-old business felt like a slightly daunting but exciting prospect. I was determined to make changes for the better, to make an already strong business even stronger over the longer term, but I had to work out exactly how I was going to do that. I think once you decide to commit to a business, you look for a sustainable, high achieving business model – one that will stand the test of time and not just a short-term solution.

I knew the answer was in the business culture. We had always put our people at the heart of what we do, but I wanted to prove that being a great employer translates into financial results. We set a clear strategy focussing on building on our foundations and relaunched ‘The Beaverbrooks Way,’ a commitment to enriching lives through three core pillars or values; Profit, Our People and Our Customers – this has become the stepping stone for everything that has followed. It’s more than a strategy, it’s a way of thinking – explaining what we want to achieve and how to do it.

We’ve made a transition over the last few years, shifting from a family-owned and family-run business into a family-owned, professionally run business. When I was appointed to CEO, I made it my mission to prove that treating people well should reflect the bottom line, which included building a highly accountable and engaged team, who regularly tell us they have high levels of job satisfaction. It’s been a massive cultural shift over the last few years but has been incredibly successful, resulting in our business profitability more than doubling over the five-year period. Our average profit is now over £13 million a year. I’m incredibly proud of our achievements and it’s truly testament to the power of employee engagement and accountability.

My people-centric leadership style. I am a firm believer that you can either push people away or you can work together and take colleagues on a journey and I chose the latter.

An open and honest culture is considered very important at Beaverbrooks. We aim to be transparent with our people, which means sharing the good and the bad. If and when we have to communicate any bad news, we make sure we explain exactly why we need to take a particular step and the rationale behind it. It’s less about managing from the top and more about taking people on a journey with us. Build trust within your business, based on openness and transparency and it will make a huge difference, trust me.

How do you feel about mentoring? Have you personally mentored anyone or are you someone’s mentee?

I wouldn’t say I have ever had any one mentor, but I have had and still do have some great role models. I don’t think I’ve ever relied upon any one individual as a mentor but I have surrounded myself with amazing people. For me, I feel that as people we are constantly evolving so no one person can steer an individual through everything. While mentoring has never been key for me, role modelling is quite different. Being in my position, I feel I am a role model to some and with that comes an enormous responsibility. I would say if anything, that I practice what I preach and that I’d never ask someone to do something that I wouldn’t be comfortable doing myself. I think that’s important for a leader.

I did, however, have some personal coaching when I was promoted to CEO, which I thought was brilliant. What it really helped me to see was that I’m capable of doing and achieving whatever I set my mind to. One of the biggest factors that women can face, is the little voice inside their heads that says they can’t do something.

Ultimately, we’re a business that really believes in role modelling as a means of passing on knowledge, skills and values to the wider team at Beaverbrooks. The idea that we can lead by example is, in my view, the best way to encourage, inspire and develop colleagues at every level of the organisation.

If you could change one thing in order to accelerate the pace of change for Gender Parity, what would it be?

Yes, I’m a woman and I’m a wife but I’m also a mum and while that may influence my life decisions, I don’t think that should impact my career progression. Women can and should be able to progress within their chosen career and in my view, this should be less about gender and more about ability. I’m lucky to work for a company that focuses on having the right people to do the job.

The one thing that would accelerate the pace of change for Gender Parity would be to actively encourage high levels of empathy within business. This would enable greater understanding and use of different skillsets, would enable stronger communications of board room decisions and encourage high levels of engagement within organisations. A business needs a balance of skills and a cross-section of people in order to succeed and this is something that should be celebrated and encouraged.

Now I’m in this position, I hope I can help to highlight just how valuable empowerment can be. Ultimately, I’m a firm believer in the idea that if you trust and treat people well, you will reap the rewards – and they will look after your bottom line.

Be kind to yourself! Women are their own worst critics. We place so much pressure on ourselves that it can be really unhealthy. We can’t be all things to all people, it’s simply not possible but we can surround ourselves with great people. I genuinely think that everyone needs people in their lives that can lift them up – this may be a mother, father, brother or sister, friend or colleague but we all need a helping hand, and a boost, from time-to-time. Accepting help and self-awareness are also important – we all need to know we’re doing a great job sometimes.

Keeping up the momentum – both financially and being a great workplace. We’re in a very strong position right now, listed 10th ‘Best Company to Work for in the UK, in the Sunday Times Best Companies to work for 2019, making us the highest-ranking retailer in the Top 100 List. We’ve also consistently held the ‘Three Star’ accreditation with Best Companies for over 13 years which is just brilliant. We’ve also being recognised by our own sector – winning the Retail Week award for best places to work, 2019. These awards are all testament to our people, who continue to live our core values each and every day, something that’s also highlighted in the fact that the business has just had its five most profitable years, in its 100-year history.

For me, it’s our people that really makes us special and in our 100th year we’re really excited for the future.