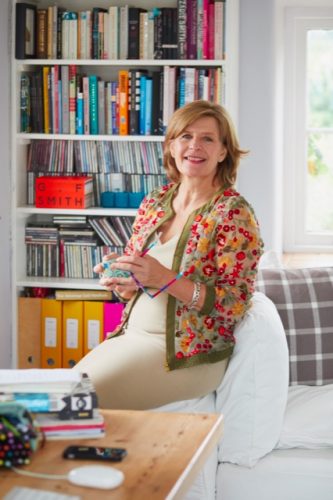 Erica Wolfe-Murray is the UK’s leading business expert and the founder of Lola-Media.co.uk.

Her new book ‘Simple Tips Smart Ideas‘ is out now.

Having supported myself since I was sixteen, it’s allowed me to follow paths that interested me to see where they led.  After a false start in the insurance industry, a copywriter boyfriend inspired me to take a look at advertising.  Now after 40+ years spent in the creative sector, his advice lasted longer than he did in my life!

I’ve had a fascinating career working in advertising (which allowed me to travel as one of my clients was British Airways), product and graphic design, as well as tv production as I jointly owned an award-winning production company with my ex-husband.  And unusually I’ve worked as both a creative head and a financial director.

This broad range of creative companies allowed me to see all their different types of creativity, understand how their business models varied and how they were structured financially.  No-one else I knew had this particular set of skills. So when I set up my current company, Lola, I harnessed all this knowledge to offer creative, cultural and tech clients ways of finding new products/services, audiences and revenue streams by innovating with what they already owned.  Or could own.

It took me some time to get people to understand what I was trying to do, but as soon as companies realised that I was helping them to grow, be more inventive, profitable and build commercial resilience from their existing business, a long queue formed!  And my order book is still full.

No, not at all.  I think the only thing that I did consciously decide was to try to become a copywriter.  I was about 21/22 working as an account handler in an ad agency, when I realised the creative teams had way more fun than I did.  I knew I was adept with words so, with my heart in my mouth, went to see the creative director to ask if he would take me on as a rookie writer.  He refused, but on me resigning from the agency (I was that determined), he gave me lots of freelance writing to cut my teeth on.  It was really dull, process work… but it taught me a craft.

And I also knew it was something I would be able to do when I had small children.  Why that came to me I have no idea… particularly as at the time I never wanted children.  That memory did make me grin some seven years later, when I was sitting writing copy for the Next Directory, with my three-week old baby lying in her cot next to me.

Because I started with nothing, I never had anything to lose.  I knew that if I worked hard, worked smart, was always willing to go the extra mile to satisfy myself then I would be ok. Yes, I had time when life was challenging, but that applies to anything worth doing.  And when you have always supported yourself, you know that you can always rely on yourself.

Perhaps the biggest challenge was when my husband left me as I was reaching the end of my 40s. We worked together in a joint company.  It was a huge blow to me in so many ways.  Because I had to move home, sort out my emotional life and be supportive to 4 teenage children, I knew that trying to move jobs as well would be a step too far.  I therefore made the contentious decision to stay working with him until I could develop an idea for my own company, but I hadn’t a clue what that would be.  Four tough, challenging years later, I set up my current company, Lola Media.

Would I have chosen to work with the person who had caused me such heartache?  In an ideal world, no.  But I didn’t really have a choice at the time and now, looking back, those years allowed me to develop the unique business I now run.

Without doubt helping 4 wonderful children get to adulthood and building fulfilling lives with careers they love.  I managed to fit my work around the children, through a combination of working from home, taking children on photographic shoots with me, working late into the night as well as having a supportive au pair from time to time.  It was so important to me that the children saw I loved my work, it was a rich part of my life they were welcome to share.  I never locked them out of it, but used to get them involved when I could.  I still do.

I think there are lots of aspects such as being hugely curious, asking endless questions but the vital factor to me is my independence of thought. I make different connections and see patterns in unique ways, I see values in places and spaces no-one else does.  Someone once said that ‘Erica doesn’t join the dots, but tells you what the dots are’, which sums me up very well.

I think mentoring can be brilliant.  But I had a tricky experience with both the mentors I was assigned.  They simply didn’t understand who I was or what I was trying to do. But I do have a coach who I have worked with since 2010 and still go to see from time to time.  She is the only person who has seen my journey, the launch of the company and now the book.  I value her honesty and integrity, her ability to challenge me, to get me to explain myself.

I have mentored someone but because I work with so many freelancers and company boards, find I don’t really have the time to invest in mentoring someone in the way I would like to.

Good question. Men have to be part of this and recognise that they are responsible for the problem, so they too need to be part of the solution. Men and women are different in so many ways, but we have a common humanity, similar life goals.  Diversity of thought, understanding different perspectives, seeing different lives makes us all stronger.  It makes companies thrive and become more successful. I try to introduce this ‘diversity of thought’ approach into the companies I work with, calling them out if I spot bias – if we all take this proactive approach then we can chip away from the bottom up.

Even since I was small I have been a ‘cat that walked alone’ – much to my classmates dislike.  This self-knowledge and ability to take care of myself has been a continual strand throughout my life.  So I would want my younger self to be assured that self-belief and self-knowledge are really good things to have.  And being able to love yourself is vital.

My book has really been focused on supporting the Uk’s 5m micro companies and 4.6m freelancers to grow and building greater commercial resilience.  I think they represent a vast, overlooked part of the UK economy.  So I would love to work with government agencies to see how we can better support and help them grow – whatever growth means for them.  Rather than what it means in the City.