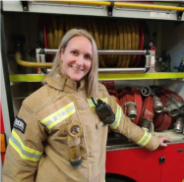 Nikki Upton knew when she met a female Firefighter helping at a London Fire Brigade open day this was the job for her.

In 2009 Nikki began her career and has loved it ever since, including the journey to and from Southampton where she currently lives.

Knowing being a Firefighter required great dedication to fitness was perfect for Nikki. Her passion for everything to do with becoming fitter and stronger helped her achieve her Level 3 personal training qualification 2015. She not only wanted to help the public when in her Firefighter uniform but as a P.T helping others realise their true potential.

Nikki is a great believer in the benefits of exercise, and attributes her own mental health to a positive attitude towards nutrition and activity, whilst maintaining a good life balance.

Based at Chelsea Nikki has gained her qualifications in the Fire Rescue Unit and specialises in line rescue. She was at the Grenfell Tower fire in June 2017 within 30 minutes of the blaze starting. She is extremely proud of the work her colleagues did that night, risking everything. Another reason why this expedition is so very close to Nikki’s heart.

Nikki has always sought out a challenge; whether it be a 10km swim, 75mile bike ride or a boxing fight in front of 1200 people. She’s not happy unless she’s working towards something. This will be the biggest challenge of all. What better way of demonstrating what women are capable of than to put those who are used to working in extreme conditions like fire into an equally extreme environment like the Antarctic?

Nikki says that even if one woman is inspired by this venture, it’ll make the three months she has to go without Twiglets all worth it.

I’m a firefighter based at Chelsea Fire Station on the Red Watch. It was my first posting when I passed out 10 years ago and I’ve been there ever since. I’m an LFB driver, and have Fire Rescue Unit and Line Level 2 qualifications, all of which keep me pretty busy. Before the brigade I went from University to an office job, which I figured out fairly soon wasn’t for me. In addition to my firefighting role I trained to be a personal trainer and spin instructor.

No, the possibility of being a firefighter didn’t even occur to me until I was in a job where I was really unhappy and knew I wanted my life to be different. I knew I wanted to be active and have a career, not just a job that made me happy, and it wasn’t until I saw an advert in a magazine for female firefighters that it became an option. Once I had it in my head I set all my hopes on it!

I’ve been very lucky in my career and as the London Fire Brigade is quite progressive, I’ve never felt like I’ve been treated differently from my colleagues because I’m a woman. Where I have faced resistance is usually by members of the public. This can either be in a completely innocent way by children who I of course am happy to explain that I am a firefighter, or it can be in the form of scathing looks/comments (sadly usually by men) who can’t quite get their head around the fact that a woman is driving a fire truck.

I have recently been to Tajikistan as part of a project to teach line rescue techniques to the women of Tajikistan and Afghanistan. These women are still sadly perceived as inferior to men, but the government is starting to recognise their potential and giving them the chance to learn new skills. Their religion meant it was vital they were taught by females, and so myself and two female colleagues taught them life saving techniques to enable them to aid in casualty extrication & rescue without the assistance of men, who largely work away from home. It was the most amazing feeling to empower these women and give them skills that they can enforce and the confidence to enforce them.

I don’t believe there is one thing – I believe it is down to years of hard work and being surrounded by people who believe in me. I am a very determined and passionate person, but whenever I have doubted myself I always have people around me who remind me of what I have already achieved, which helps me to power through the doubt.

I was given a mentor when I first started and I still work with him today – he is like my firefighter dad and has always looked out for me and guided me – even when that means hanging back to let me figure out the right thing on my own. He’s coming up to retirement soon which is really sad but I’ll always have his voice in my ear. On the back of his success I was even given my own mentee in June 2018, who I make sure I guide in the best way possible to ensure he is happy in his role and knows where to turn to for help. That doesn’t necessarily involve me being blindly nice, sometimes its about a bit of tough love to help him choose the right path, but I know he’s grateful for it!

I don’t believe we highlight the amazing roles that women are capable of to the next generation. Without knowledge of what they can be when their older, how do we expect them to choose anti-stereotypical roles? A greater understanding would perhaps come from representation of women in certain fields doing presentations in schools, in order for them to question the ‘norm’.

To have a little bit (/a lot more) faith in yourself – things always turn out good in the end. And to stop trying to change for people – trying to squash down the ‘Nikki’ just makes you miserable.

The next big challenge is the 1900km Antarctic crossing in 2023 that I’ll be setting out to achieve with the most incredible women by my side. It’s the biggest challenge I’ve ever committed myself to and it’s going to be all-consuming over the next few years but in the best possible way. Before that will be all the smaller challenges we face to enable us to get to that point (e.g. Half/full marathons, tower climbs, tyre pulls, long distance walks/runs/skis, and somehow putting on 20kg in weight!)