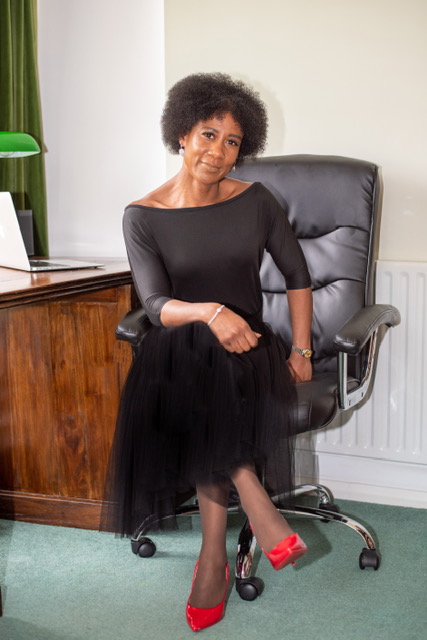 Keep up to date with her journey on Instagram www.instagram.com/familylawguruuk.

My name is Paula Rhone-Adrien and I am a practising Barrister. I have successfully practised for over 20 years at the English Bar and I specialise in divorce, disputes between parents regarding their children and cases concerning the welfare of a child. I’m often told I don’t look like a ‘Barrister’ and it’s true I don’t fit the stereotypical picture. I certainly don’t come from a wealthy family; I grew up in the east end of London and when I would tell friends or teachers how I was going to be a Barrister when I grew up, most didn’t know what that meant and the one’s who did either laughed or pitied me.

So I was poor, black and female attempting to enter a career that I was constantly being told wouldn’t accept me. I really had no idea about the challenges that lay ahead of me, and how unprepared I was for them. I didn’t have a mentor, anyone to tell me what university to apply to, what clubs I should join, how I should conduct myself in interviews and how I was going to need the wild courage of starving lioness to see my vision come to reality.

No, I just possessed an absolute, only option, single vision. There was no time to sit down and consider, a detailed plan, it was just simply: go to college; get to university; get to Bar school; attain pupillage (on the job training which is incredibly hard to acquire because places are so limited); and then, become a tenant (when a set of Chambers is finally prepared to take you on). How this was all going to be achieved just wasn’t on my radar, partly because I didn’t know how, my parents certainly didn’t and there was no one around who was able to educate me about the process and hurdles and I wold inevitably encounter. So when the hurdles did come up, sometimes I wasn’t as prepared as I should have been. I do wonder if I had the opportunity to do things again, whether I would have planned things differently, and I don’t think I would. To be honest, all that planning may well have put me off! The realisation of how high those hurdles would be and how much time and energy it was going to take to overcome them may have meant me probably giving up, or simply not trying at all. In the academic year 2018/19, there were nearly 1,700 people called to the Bar, yet there were only 430 odd training places available. If you were lucky enough to finish training, there were only just over 300 tenancies (full time jobs) available. Clearly, the odds were stacked against me.

I have faced numerous challenges along the way. I was homeless for a considerable amount  of time in my twenties, sofa surfing and being heavily reliant on family, friends and ex boyfriends to feed and clothe me. I certainly wasn’t expecting that, and as you can imagine, it’s an incredibly humbling and tiring experience. I also, for the first time encountered racism, sexism and prejudice regarding my east end background. It was hard for me to express the experiences to those within my career network, because you just didn’t, and it was even harder trying to explain it to all those who had supported me through the process that it was, at times, a nightmare. I would be so distressed by some of the challenges I faced that I would lose the ability to speak – not so great for a trained advocate! However, I slowly realised that the challenges I was encountering, although hurtful, were no different to what others were having to contend with. So I learnt to confront my bullies with poise and grace, I learnt to shrug off their attempts to hold me back and I learnt that it was ok to be confronted by hurdles. Everyone has demons and you can waste your life comparing yours with theirs, but that was for me, the real challenge, getting past the fact that life could be unfair sometimes, and that it wasn’t personal.

I was really proud of myself when I was awarded the industry coveted Times Lawyer of the Week title. It was for a case that I had battled long and hard over, but we kept on losing, even though I was certain we should have been successful – you can imagine how hard it is for a client to believe in you, pay you money they don’t have and then to keep on losing! However, the case  eventually went to the Court of Appeal, some two years later, and we won, resoundingly. I realised looking back, that I was not only battling the system, but my own demons that took me back to being just a student. The buck was always going to stop with me, and I needed to be right, even when all others were telling me I was wrong. However, the biggest achievement was not the win, but keeping my head screwed on, not allowing it to affect the relationship with my husband, to who I am a ‘wife’, or my children to who I am their ‘mother’.

Having total and utter blind faith in myself has been the major factor in my success. Even when things have gone disastrously wrong for me – and trust me they have – I have a voice that pops into my head, that tells me to ignore the problem and understand that there is a way out, and the voice has always been right, no matter the despair I am facing at the time. I trust that voice now and wished I had been able to hear it when I was younger.

I am a real advocate of mentoring and learning to lean on someone for their knowledge and wisdom. I suspect even if I had the chance all those years ago, I would have been too embarrassed about taking up the opportunity. I wasn’t very good at asking for help and didn’t realise that people wanted to or were willing to give their time to someone they didn’t know. I am currently mentoring someone who is at university and she is far more switched on than I ever was, she is also teaching me so much about the hurdles that her generation are now having to deal with that seem so much harder. For example,  competition on a global market and the weight of student debt that you have to carry into your fledgling career, and that’s of course if you make it that far. However, I am truly excited by her journey and she knows she won’t have to do it on her own.

We live in a fragmented, socially isolated world now, where people see more of their virtual friends than they do their own family. It is going to take time for our brains to catch up with how we are expected to form relationships and communicate in a positive way to maintain those important relationships in a virtual world, like your future partner or any children you may have. In my opinion women are disproportionately negatively affected by this change in society as we move away from relying on those who know us best and create our ‘likeable’ lives for our online community. Yet we know that two women every week are killed by a partner or ex partner due to domestic abuse. This can only happen because as a society, we have learned to close our eyes to the pain and suffering of others, even when it’s a member of our own family. To accelerate the pace of positive change for Gender Equality, for women to become a valued member of society, I would strongly advocate the teaching of conflict resolution in schools. Thanks to the recent evolutionary explosion of life inside the online world, our language has led us to use shortened, blunt or stunted words that give the reader little space     for thought and reflection. I fear we will lose the art of communication, and with that the ability to recognise the pain of another.  The government statistics tell us that domestic abuse cost the treasury £66 billion pounds in 2017, this is an astronomical figure. Sadly, it also seems that young people experience some of the highest rates of domestic abuse and yet less than 1 in 5 police forces have any support that specialises in assisting this group. We should be educating young people, equipping them with skills to understand that it is not ok to abuse your partner and how to regulate one’s anger or frustration during times of conflict to bring about a positive resolution.

Sometimes I just challenge myself to get out of bed and dressed! Sometimes I visualise world domination. I’m trying to forge a new career path and in doing that I am challenging myself to network and access new opportunities that I would have never dreamed available to me before. I achieved my goal of becoming a Barrister, and although it wasn’t easy, I am now fearless about how I am going to navigate the future.