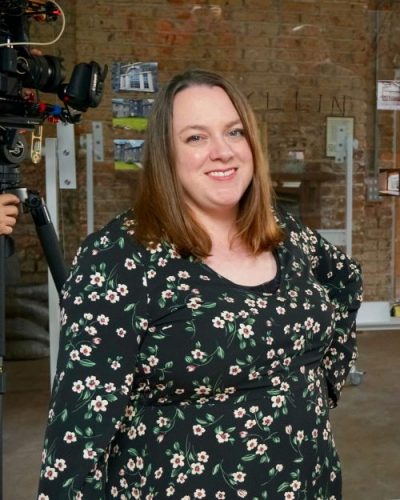 Sara has been working in museums and heritage for over a decade, as a curator, researcher, TV presenter and occasional costumed Tudor.

She is a co-founder and trustee of the East End Women’s Museum.

Born and raised in west Wales, I trained as an architectural historian at Cambridge – and since then, I’ve been working in the heritage sector, as a curator, consultant and broadcaster. These days you can find me working at the archives at Cardiff University, or travelling to east London to work on an amazing women’s history project – it’s quite a commute but it’s worth it.

As Co-Founder of East End Women’s Museum, I’m extremely proud of what we’ve achieved over the last four years. It’s all been down to the amazing response we’ve had from the community: people want to see women’s lives and histories celebrated, and that’s what we do best! Starting a museum from scratch is a big job, but it’s incredibly rewarding.

I also present my own show on Welsh television, so when I’m not in London or Cardiff, I’m off exploring abandoned buildings with a film crew!

I never thought I’d end up in the heritage sector – I had studied languages and planned to work in the diplomatic service. But, one summer I took a job as a gallery cleaner, and fell in love with museums! I started volunteering, then taking on some casual work running workshops and installing exhibitions. After that, I was hooked.

I worked for National Museum Wales for many years – doing everything from planning re-enactment battles to designing apps. If you’d told me at eighteen that I’d be presenting my own TV show in Welsh, and working with rare books, I would never had believed you!

The biggest challenge for me to overcome was OSA, a sleep disorder, which made me extremely ill for a very long time. It meant that my immune system was very weak, and that I couldn’t get the rest that I needed. It took multiple surgeries, and over eight years of treatment, to address it.

Nowadays I look back and I wonder how on earth I got by on so little sleep! It’s a condition that people don’t associate with younger women, so it’s important to raise awareness, to make sure diagnosis and treatment is easier to come by.

We went from a viral tweet, to a scrappy pop-up, and now we’re an established organisation with several wonderful partnership exhibitions and collaborations under our belt. When we opened our exhibition with Hackney Museum, the place was packed to the rafters and the visitors’ response was amazing – it gives me such a buzz when people connect with these amazing women from London’s past.

I’ve had great experiences both as a mentor and mentee – I’ve been very lucky to be part of women’s networks, too, that have provided so much support and practical guidance. When I was starting out I was SO passionate about what I do – working with women’s networks taught me how to focus that passion, and how to bring people along with me on the journey.

I know quotas can be controversial, but the pace of change in the heritage sector is glacial, especially when it comes to appointing women of colour and working class women to senior positions. We need a catalyst to shift this – and I think something like a boardroom quota system could be a disruptive force for good for many of our national institutions.

There is a natural void after one project ends, and another begins. Learn to get comfortable with that, and even enjoy it – it’s where all your best ideas will come from. Also, start powerlifting a LOT sooner – I know you don’t believe me but you will love it!

The next challenge for me is to support the East End Women’s Museum as we move to a permanent home in east London.

In our early days, we ran on people power and coffee – now that we’re an employer, and an established organisation, we have a responsibility to build something inspiring and sustainable for young women in London and beyond to enjoy.

That means a lot of advocacy, a lot of fundraising, a lot of organisational development. Our Trustees and staff are amazing – terrifyingly accomplished women, to be honest – and I can’t wait to see what the future holds for us.