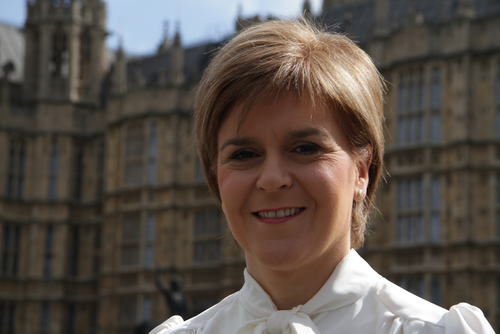 Nicola Sturgeon has weighed in on the BBC gender pay gap debate, saying “these issues have frankly been going on under the radar for too long.”

Scotland’s First Minister has become the latest to brand the BBC’s pay gap “unacceptable” and has called for the organisation to “accelerate progress.”

Since the BBC announced its pay report, a number of high-profile women have called for more to be done to close the gap.

Broadcaster Jane Garvey accused the BBC of “deceiving” the women who work at the organisation; newsreader Anita Rani has called for the BBC to address the race gap as well as the gender gap; and Fiona Bruce, Victoria Derbyshire and Sue Barker were amongst 40 female BBC presenters, journalists and correspondents to sign a letter demanding equal pay.

Speaking at the Edinburgh International Television Festival, Sturgeon said, “I do think the BBC should look to accelerate progress here.”

“The Equal Pay Act was passed in the year I was born, which, as you probably know, was not yesterday.”

“These issues have frankly been going on under the radar for too long.”

“Well, they’re not under the radar anymore and it’s time to up the progress.”

Continuing, she said, “Perhaps the most obvious and unacceptable element of the pay gap that was exposed was to see male and female presenters sometimes on the same programme – whether it was BBC Breakfast or the Today programme – doing apparently the same job but for grossly different salaries.”

However, Sturgeon did highlight that the BBC is not the only media outlet to have a gender pay gap. Last week, it was revealed that ITV were giving presenter Holly Willoughby a pay rise of £200,000 – finally making her equal to her co-host, Philip Schofield.

Sturgeon said, “The BBC will not be the only media organisation that has a gender pay gap.”

“The BBC experience exemplifies the case for much greater transparency in the reporting of companies’ pay policies, not just in the media but more generally.”

“We can only call out unacceptable practices when we know they exists.”

“So I think the BBC experience has much wider lessons for the media but for our society as a whole.”

Alison is the Digital Content Editor for WeAreTheCity. She has a BA Honours degree in Journalism and History from the University of Portsmouth. She has previously worked in the marketing sector and in a copywriting role. Alison’s other passions and hobbies include writing, blogging and travelling.
Previous PostExercise could help to combat postnatal depression, research suggestsNext PostBritish companies must now reveal pay figures between boss and workers