0
You have 0 items in your cart
Go To Shopping
Home > News > Current Affairs for Women > Ivanka Trump: “Workplaces need to respect women’s values”

The U.S president’s daughter and adviser was a guest speaker at the World Assembly for Women in Tokyo.

In her speech, Trump explained that workplaces needed to accommodate the need for a balance between work and family.

She said, “Despite the increase in the percentage of women at workplaces, corporate expectations have remained “stagnant” and still operate on “a single-honor mindset” with expectations for mothers to stay home to provide full-time care.“

Trump went onto insist that innovative solutions need to be created to ‘to make it easier for women to enjoy motherhood without compromising their careers.’

“This isn’t a woman’s issue, it’s a family issue,” she said.

She continued, “Corporate “disproportionately” impacts women and most likely causes them to leave jobs or curtail ambitions due to lack of affordable care for children or relatives who can help.“

Speaking about women in STEM subjects, Trump said: “Female and minority participation in STEM fields is moving in the wrong direction,”

“We must create equal participation in these traditionally male-dominated sectors of our economy.”

Ivanka also touched upon the sexual harassment of women in Hollywood and at work.

All too often, our workplace culture fails to treat women with appropriate respect,” she said.

“This takes many forms including harassment which can never be tolerated.”

The president’s daughter will later hold talks with Japan’s Prime Minister Shinzo Abe to lay the groundwork for her father’s trip, which begins in Japan over the weekend.

Speaking at the same conference, Abe said he had a “strong commitment” to women’s rights himself, stressing: “I really feel that Japan has come a long way.”

“When women live up to their potential, many world issues can be solved,” said Abe. 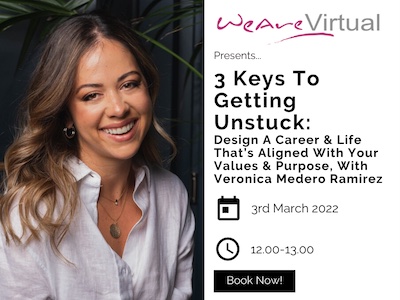 03/03/2022: WeAreVirtual: 3 Keys to getting unstuck: Design a career and life that’s aligned with your values and purpose | Veronica Medero Ramirez