0
You have 0 items in your cart
Go To Shopping
Home > News > Current Affairs for Women > Johanna Konta criticises coverage of women’s tennis, calling for “more credit” to be given 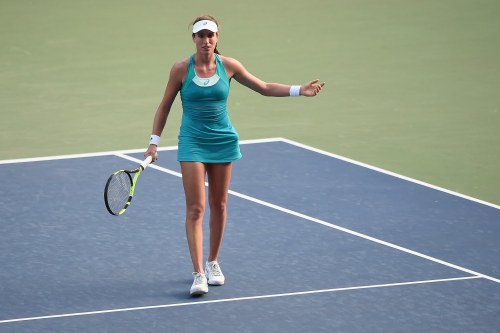 British No. 1 tennis player, Johanna Konta has hit out at the coverage of women’s tennis, calling for “more credit” to be given.

Speaking to Reuters at the Wuhan Open, China, Konta said that female tennis players had “really kicked arse” and “they were outstanding”, but they do not get the credit they deserve.

Konta said, “When people commented on my match being the most-watched match of the Championships, they put it very much in a female context.”

“I thought, ‘well, why does it need to be in a female context? It’s a tennis match. Part of an event.’”

“I think that’s what makes sport very beautiful: it isn’t gender-biased technically, everyone is out there doing the work and trying to be the best they can be.”

“It’s important to acknowledge the great qualities of both men and women in sport and not segregate them, because you will find very similar qualities in Serena Williams and Roger Federer.”

“More credit needs to be given.”

“There is so much talk that the women’s draw is so open.”

“But it’s open in the sense of there are so many amazing players.”

“We have the depth.”

Tennis was the first sport to pay equal prize money to both its male and female players. In 1973, after campaigning led by player Billie Jean King, the US Open started to pay both genders the same.

Now, female players being paid the same as their male counterparts at Grand Slam events. Despite this, there is still a gender pay gap in the sport.

Gender equality has been high on the agenda in the world of tennis recently. The British male No. 1, Andy Murray, has spoken out about the need for gender equality in sport.

Murray has challenged sexist attitudes towards women in sport before, famously correcting a journalist at Wimbledon this year for overlooking the achievements of American women during a press conference.

Alison is the Digital Content Editor for WeAreTheCity. She has a BA Honours degree in Journalism and History from the University of Portsmouth. She has previously worked in the marketing sector and in a copywriting role. Alison’s other passions and hobbies include writing, blogging and travelling.
Previous PostInspirational Woman: Katherine Wilding | Junior Account Executive, Skout PRNext PostOver 1,000 women die of breast cancer unnecessarily each year due to NHS red tape