0
You have 0 items in your cart
Go To Shopping
Home > Culture > Books > Recommended Read | Lean In: Women, Work and the Will to Lead by Sheryl Sandberg

In October 2011, Jocelyn Goldfein, one of the engineering directors at Facebook, held a meeting with our female engineers where she encouraged them to share the progress they had made on the products they were building. Silence. No one wanted to toot her own horn. Who would want to speak up when self-promoting women are disliked? Jocelyn switched her approach. Instead of asking the women to talk about themselves, she asked them to tell one another’s stories. The exercise became communal, which put everyone at ease.

Lean In: Women, Work, and the Will to Lead by Sheryl Sandberg

Owning one’s success is key to achieving more success. Professional advancement depends upon people believing that an employee is contributing to good results. Men can comfortably claim credit for what they do as long as they don’t veer into arrogance. For women, taking credit comes at a real social and professional cost. In fact, a woman who explains why she is qualified or mentions previous successes in a job interview can lower her chances of getting hired.

As if this double bind were not enough to navigate, gendered stereotypes can also lead to women having to do additional work without additional reward. When a man helps a colleague, the recipient feels indebted to him and is highly likely to return the favor. But when a woman helps out, the feeling of indebtedness is weaker. She’s communal, right? She wants to help others. Columbia Business School professor Frank Flynn calls this the “gender discount” problem, and it means that women are paying a professional penalty for their presumed desire to be communal. On the other hand, when a man helps a coworker, it’s considered an imposition and he is compensated with more favourable performance evaluations and rewards like salary increases and bonuses. Even more frustrating, when a woman declines to help a colleague, she often receives less favourable reviews and fewer rewards. But a man who declines to help? He pays no penalty.

Because of these unfair expectations, women find themselves in “damned if they do” and “doomed if they don’t” situations. This is especially true when it comes to negotiations concerning compensation, benefits, titles, and other perks. By and large, men negotiate more than women. A study that looked at the starting salaries of students graduating with a master’s degree from Carnegie Mellon University found that 57% of the male students, but only 7% of the female students, tried to negotiate for a higher offer. But instead of blaming women for not negotiating more, we need to recognise that women often have good cause to be reluctant to advocate for their own interests because doing so can easily backfire.

There is little downside when men negotiate for themselves. People expect men to advocate on their own behalf, point out their contributions, and be recognised and rewarded for them. For men, there is truly no harm in asking. But since women are expected to be concerned with others, when they advocate for themselves or point to their own value, both men and women react unfavourably. Interestingly, women can negotiate as well or even more successfully than men when negotiating for others (such as their company or a colleague), because in these cases, their advocacy does not make them appear self-serving. However, when a woman negotiates on her own behalf, she violates the perceived gender norm. Both male and female colleagues often resist working with a woman who has negotiated for a higher salary because she’s seen as more demanding than a woman who refrained from negotiating. Even when a woman negotiates successfully for herself, she can pay a longer-term cost in goodwill and future advancement.

When I was negotiating with Facebook’s founder and CEO Mark Zuckerberg for my compensation, he made me an offer that I thought was fair. We had been having dinner several nights a week for more than a month and a half, discussing Facebook’s mission and his vision for the future. I was ready to accept the job. No, I  was dying to accept the job. My husband, Dave, kept telling me to negotiate, but I was afraid of doing anything that might botch the deal. I could play hardball, but then maybe Mark would not want to work with me. Was it worth it when I knew that ultimately I was going to accept the offer? I concluded it was not. But right before I was about to say yes, my exasperated brother-in-law, Marc Bodnick, blurted out: “Damn it, Sheryl! Why are you going to make less than any man would make to do the same job?”

My brother-in-law didn’t know the details of my deal. His point was simply that no man at my level would consider taking the first offer. This was motivating. I went back to Mark and said that I couldn’t accept, but I prefaced it by telling him: “Of course, you realise that you’re hiring me to run your deal teams, so you want me to be a good negotiator. This is the only time you and I will ever be on opposite sides of the table.” Then I negotiated hard, followed by a nervous night wondering if I had blown it. But Mark called me the next day. He resolved the gap by improving my offer, extending the terms of my contract from four to five years and allowing me to buy into the company as well. His creative solution not only closed the deal, but also set us up for a longer-term alignment of interests.

Everyone needs to get more comfortable with female leaders – including female leaders themselves. Since 1999, editor of Fortune magazine Pattie Sellers has overseen an annual conference that she calls the Most Powerful Women Summit. On my first night there in 2005, I was in the lounge with two close friends, Diana Farrell, then head of the McKinsey Global Institute, and Sue Decker, then CFO of Yahoo. We were talking about the name of the conference, and I mentioned that when I saw the title on Google’s corporate calendar, I asked for the name to be changed to Fortune Women’s Conference. Diana and Sue laughed and said that they had done the exact same thing.

Later, Pattie explained that she and her colleagues chose this name on purpose to force women to confront their own power and feel more comfortable with that word. I still struggle with this. I am fine applying the word “powerful” to other women – the more the better – but I still shake my head in denial when it is applied to me. The nagging voice in the back of my head reminds me, as it did in business school, “Don’t flaunt your success, or even let people know about your success. If you do, people won’t like you.”

Less than six months after I started at Facebook, Mark and I sat down for my first formal review. One of the things he told me was that my desire to be liked by everyone would hold me back. He said that when you want to change things, you can’t please everyone. If you do please everyone, you aren’t making enough progress. Mark was right. 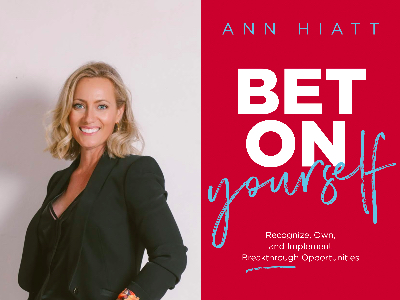 Behind the Cover with Ann Hiatt, Author of Bet on Yourself: Recognize, Own, and Implement Breakthrough Opportunities