0
You have 0 items in your cart
Go To Shopping
Home > Career Development > Flexible working > Long live the office!

‘Working from home?’ It’s become one of those questions that it’s impossible to ask without at least a hint of irony. Another one would be ‘shall we just have one for the road?’ but that’s a different story.

The thing about working from home – no irony this time – is that and more of us are doing it more and more often.

In fact it has been widely predicted as the future of work. The way we’re all wi-fied up, switched on and tuned in 24-7 means that the ‘the office of the future’ has been imagined as anywhere other than a building full of desks. ‘Work has left the building’ is the stock expression.

But it hasn’t. In fact, in the modern knowledge-work economy shared workspaces are more important than ever.

Researchers at University College London have found that the good old fashioned office still has plenty going for it. Dr Kirsten Sailer, who blogs at spaceandorganisation, insists that an office is first-and-foremost a social place. As she puts it: “It is a place for interactions with others; a place for collaboration and team work; a place to exchange ideas; a place to bump into others, strike a conversation and possibly to get to know someone new that might help solve a problem.”

The sort of happy and productive accidents that Sailer describes just don’t happen when you’re perched on the end of the sofa in your dressing gown.

modern workplaces are, more than ever, built to delivering the sort of working lifestyle that we can all buy in to, even if it might mean fewer days ‘working from home

And sophisticated organisations like Coca-Cola, Walt Disney, EMI and Sony Ericsson aren’t blind to the creative benefits that being around other people can bring. But they’re also increasingly aware that their staff are less happy, less productive and less likely to stick around when they’re cooped up like battery hens. So there’s a balance to be struck.

Those particular corporate giants, amongst others, are all profitably reaping the benefits of state-of-the-art Goodman office space in Hammersmith in a development that, in many respects exemplifies the next generation of workplaces.

The Hammersmith Embankment business park has been carefully designed to balance the benefits that Dr Sailer identifies with the sense of liberty you get working from home. It is brimming with communal open spaces, exercise facilities and eating and meeting venues. What’s more, regular recreational events are staged for residents, and, of course, all the attractions of the West End are just around the corner.

If that strikes you as more like a holiday village than a business park, then you’re getting the point. That is to say, enlightened organizations are now keen to empower and stimulate the people who work for them rather than treating them like robotic wage slaves.

According to BBC News Mobile working is one expression of that sort of contemporary thinking. But companies, especially large knowledge-based concerns, are increasingly trying to make the working part of our lives as social, as comfortable and as rewarding as possible – for everyone involved.

The insight provided by researchers like Kirsten Sailer and her colleagues at UCL means that modern workplaces are, more than ever, built to delivering the sort of working lifestyle that we can all buy in to, even if it might mean fewer days ‘working from home’ – and yes, that was meant ironically! 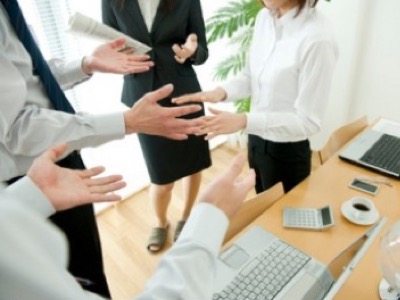 Communication is the Key to Getting Along with Co-Workers