Maria Balshaw has been announced as the new director of the Tate, the first woman to hold the position in the gallery’s 120-year history.

Balshaw currently runs the Whitworth Art Gallery in Manchester, but is due to take on the role in June this year. She will take over from Sir Nicholas Serota, who has been director at the Tate since 1988.

Alongside taking charge of the Tate Modern and Tate Britain in London, Balshaw will also take responsibility for Tate Liverpool and Tate St. Ives.

Speaking of her appointment, Balshaw said, “Under Nicholas Serota’s leadership, Tate has changed forever how we all think about art and artists and has made visual art a central part of a vibrant cultural life in the UK.”

“I am tremendously excited to be leading Tate in the next chapter of its life.”

“I look forward to developing Tate’s reputation as the most artistically adventurous and culturally inclusive gallery in the world.”

Maria began her career in academia before working for Arts Council England in Birmingham and then becoming Director of the Whitworth in 2006. She quickly became a key figure in the transformation of Manchester’s cultural sector, curating radical and popular programmes and expanding the city’s art collections. In recent years she spearheaded the Whitworth’s £17m transformation, which won Museum of the Year and was nominated for the Stirling Prize, and has been working towards the launch of Factory, a new arts venue and permanent home for Manchester International Festival. She was awarded a CBE for services to the arts in 2015.

Balshaw’s appointment at the Manchester gallery meant she was only the second female director, with Margaret Pilkington being the only other female director from 1925 to 1945.

Commenting on Balshaw’s appointment, Lord Browne, chair of the Tate trustees said, “The trustees and I know that Maria has the vision, drive and stature to lead Tate into its next phase of development.”

“We enthusiastically look forward to working with her as she does so.”

Alison is the Digital Content Editor for WeAreTheCity. She has a BA Honours degree in Journalism and History from the University of Portsmouth. She has previously worked in the marketing sector and in a copywriting role. Alison’s other passions and hobbies include writing, blogging and travelling.
Previous PostBlackRock calls for an end to excessive pay for FTSE executivesNext PostLady Gaga, Natalie Portman, Danai Gurira & more sign open letter in support of girl’s education 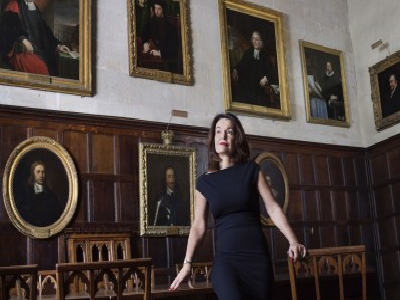 Explore art with all the senses at ‘Tate Sensorium’