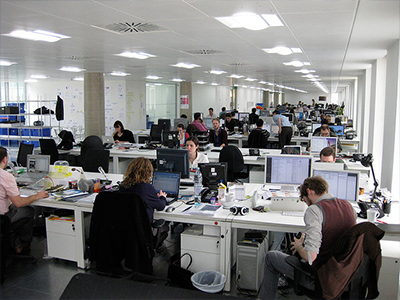 One in four women have been cautioned over their appearance at work, a new survey has revealed.

The research, conducted by VoucherCodesPro.co.uk, found that women were more likely to be pulled up on their appearance, in contrast to their male counterparts.

The survey found that just nine per cent of men surveyed had been warned about their appearance.

The survey of more than 2,000 Britons also revealed that 35 per cent of managers found female workers a “distraction” to their male colleagues.

The top reasons for women to be pulled up on their appearance was down to wearing, “too much make-up,” with the length of their skirt coming in a close second.

The study comes after the recent furore over women’s work attire and whether it is acceptable to force women to wear high heels.

In 2016, it was reported that a woman was sent home from her job at accountancy firm, Price Waterhouse Coopers (PwC), where she was employed by the temp agency, Portico.

Nicola Thorp was sent home after refusing to wear high heels for her nine hour shifts. Portico recruited the reception staff for PwC and Thorp claims to have been sent home without pay.

Workplace dress codes were then debated in Parliament, after an online petition called for it to be made illegal for companies to require women to wear high heels at work.

George Charles, spokesperson for VoucherCodesPro.co.uk, said, “It’s OK to pull up a member of your staff on their appearance if you genuinely believe that they’re breaking their contract in anyway, or even if it poses some sort of health and safety risk, but you just can’t tell women to change their appearance because they’re possibly going to be distracting to their male colleagues.”

Alison is the Digital Content Editor for WeAreTheCity. She has a BA Honours degree in Journalism and History from the University of Portsmouth. She has previously worked in the marketing sector and in a copywriting role. Alison’s other passions and hobbies include writing, blogging and travelling.
Previous PostDonald Trump bans transgender people from serving in the US militaryNext PostEuropean court rules that sex is just as important to older women