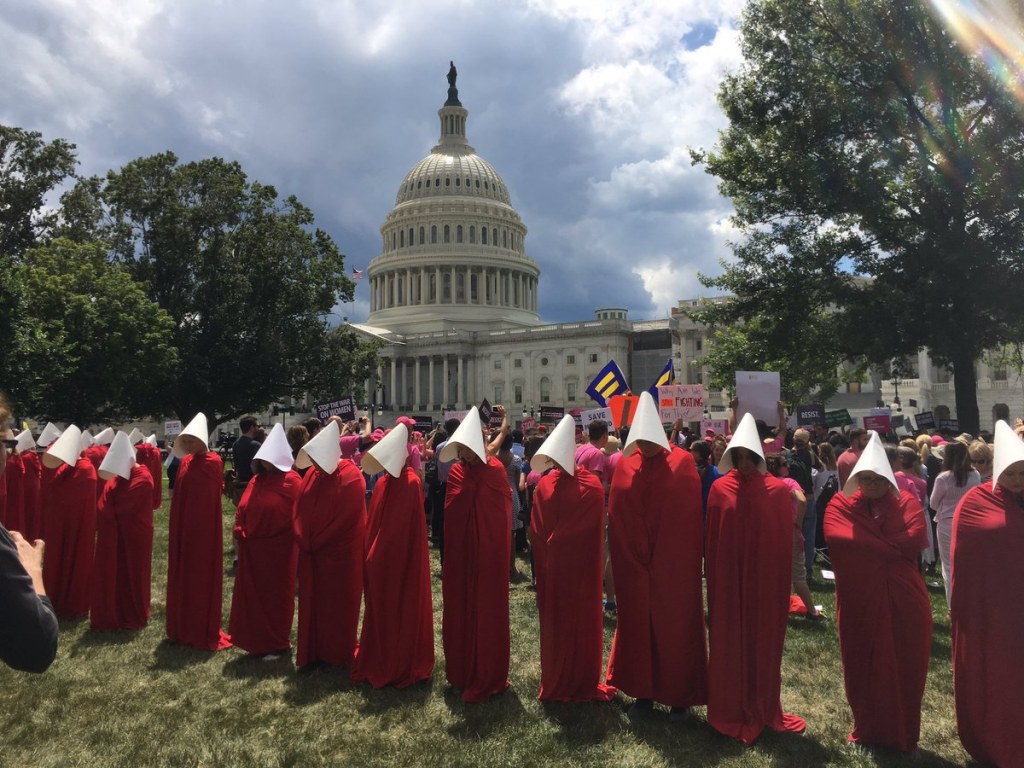 Activists dressed up as handmaid’s from The Handmaid’s tale this week in a protest against Trump’s healthcare bill.

Planned Parenthood and MoveOn.org collaborated on Tuesday in Washington against the Senate Republicans’ healthcare bill.

The new healthcare bill in the U.S would leave an estimated 22 million Americans without health insurance.

Women’s reproductive rights would suffer as a result of the bill being passed. It would also mean insurance companies opting out of covering maternity care and contraception.

Protesters gathered in Washington to start off a series of speeches called “People’s Filibuster” in an effort to keep Planned Parenthood funding.

Senate Majority Leader Mitch McConnell announced that the government will not vote on the bill until after the fourth of July.

The Handmaid’s Tale is a book by Margaret Attwood, set in a dystopian universe where many women are infertile and so are forced into sexual slavery for the wealthy in order to procreate.

In the television adaptation, the handmaid’s wear red cloaks and white bonnets, which the 36 planned parenthood activists imitated in their protest.

A protester explained why they decided to wear the outfits inspired by the novel:

“Dressing up as a handmaid gives a clear message to our administration and the Senate about how seriously we take their decisions and how radically it can affect our lives.”

Similar demonstrations have taken place in 2017 already; Texas and Ohio have both seen handmaid-inspired objections to the GOP bill.

0Shares
abortionActivismPlanned ParenthoodThe Handmaid's Tale
Previous PostMarcello: Love in the City | 3 | My date was glued to her phone all nightNext PostInspirational women in architecture: Who is your favourite?