Viking has conducted a survey of over 1,500 office workers to find out about procrastination patterns, the reasons for them, and the effects it has on the working day. It’s research has concluded that the average worker spends 52 minutes a day procrastinating. 40% of those procrastinating did so in order to take a break from the stress they were feeling from work. The survey showed that we can be more productive by taking regular breaks throughout a work day.

In those 52 minutes that the average worker spends a day procrastinating,  they most commonly frequent sites including Facebook (which 57% of respondents said they use), BBC News (36%), and Twitter (30%), showing that the majority of procrastination time is on finding out latest news.

Social media was also high on the list of distractions with our respondents, with workers checking their accounts  up to four times a day. When asked how they would feel if social media was to be banned from the workplace,  44% of them said their day would worsen, and 29% even said that removing social media would make them even less productive.

The results showed that the biggest source of procrastinating was actually from internal problems in the workplace – 48% of people said they procrastinated because they were waiting on other people’s work to be completed before they could finish their own.

Of those surveyed, 40% said they procrastinated in order to take a break and ease the stress they were feeling from work. Office workers experience a greater amount of stress than those who work from home.

“If an employee is struggling with their work, a quick break can help them take a step back and think about their situation in a new light. Rather than trying to press on through a challenging task, doing something that relaxes them or lightens their mood can help a worker stay productive in the long-run.”

CLICK HERE TO TAKE VIKING’S ‘HOW STRESSED ARE YOU?’ QUIZ 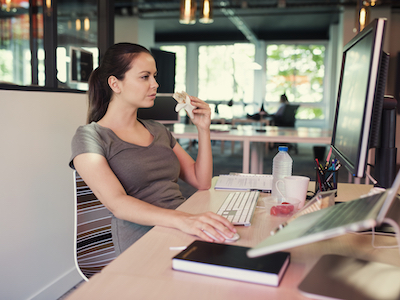 Finding work-life balance in the pandemic