A human being is made up of mind, body and spirit and according to two of my friends, my spirit level is low.

I’m a practical person. Give me flour and I will make bread without thinking about where the flour came from and other similar deep thoughts.

I needed to find my spirituality they said, which is why I found myself out of my comfort zone at a retreat wedged between an expansive lagoon and an ocean in the middle of a mangrove National Park in deepest Sri Lanka. I chose it because The Times called it the best in the world while Conde Nast Traveller’s review is headed: Balanced re-tuning at a go-slow haven.

I had not heard of Ayurveda which is the science of living in harmony with the laws of nature. In today’s busy world they said, we often forget to maintain our natural state of being – so experiencing the principles of Ayurveda, an empowered sense of your own make-up can be discovered. This was a new concept to me but one I took on board.

Ten people of disparate ages and genders came together in a circular building of architectural beauty with no TV, radio or noise except for birdsong. (On the one day of silence there wasn’t even the sound of talking!). Three men Including a young man from Paris and seven women, two from Australia, one from the UAE and the rest Brits were soon welded into a supportive, collegiate group who became friends.

My room was in a thatched cabana (see below) made by artisans using traditional building materials and though the sun was hot the room and the building always remained cool. 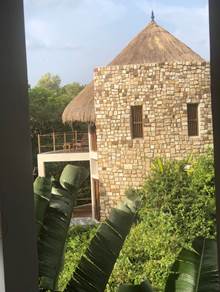 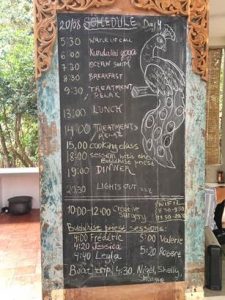 The food was fresh authentic Ayurvedic cuisine (without caffeine, alcohol or meat) devised by an energetic 20-year head chef who learned at his mother’s knee and was hired after a spell at a Columbo cooking school. We ate unfamiliar tasty food such as spicy gravy, noodles kottu, cuttle fish curry, gurkin salad with pumpkin and onion leaves. One night we had to eat like Sri Lankans without utensils using only hands which caused some hilarity trying to get fingers around potato curry.

Time drifts by in a haze of treatments topped and tailed by kundalini yoga at 6 am, each day (see below). Doing yoga while watching the sun rise, against the sound of crashing breakers and a cooling wind on your arms is one of my most potent memories of these 11 days. 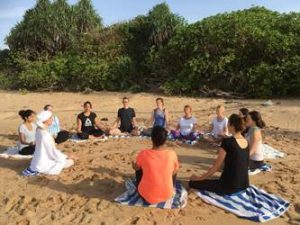 Others include meditating while trying to clear the mind (and sometimes succeeding) and having a one-to-one with a remarkable Buddhist monk whose message was live for the present and the future. It sounds basic, but it was relevant for me. 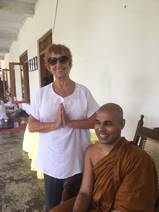 The masseurs were smiley with strong arms!  You haven’t lived until you have the full body massage with four hands – two women massaging every inch of your body with warm oil. Other treatments included acupuncture, osteopathy, oil poured on the forehead to calm the mind (I had these three times so obviously my mind needed much calming!), massaging joints, head, feet massage with oil. Truly time stood still so it really was a go-slow haven.

On the last day of the treat – after a head massage – i was in a bath full of flowers – see below. Total bliss. 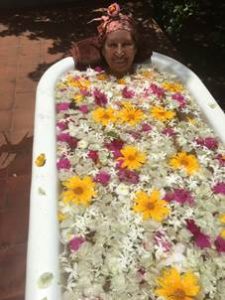 Other elements of that last day was a huge bonfire when we had to write down negative thoughts for these to be thrown into the flames. Surprisingly effective. Our supper was eaten outside under the stars and a brilliant full moon.

So what have I learned? The retreat advises small steps once you are back and I shall follow that sensible advice. I shall try to meditate more regularly and will set myself to embrace the more spiritual side of my life which I have discovered is necessary to wellbeing.

Above all I intend thanking my two friends who started me on this journey of deeper meaning, taking life as an adventure for what it is rather than what I believe it should be.