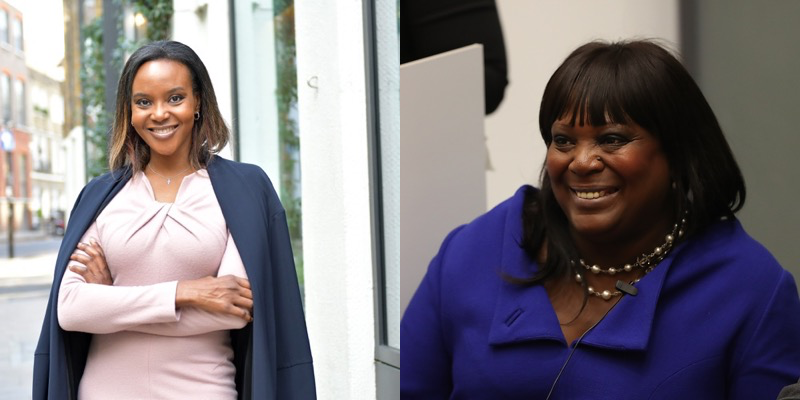 Abimbola is a senior leader for Roche, the world’s largest biotech, leading the legal and corporate compliance functions. She is a multi-award winning solicitor and diversity campaigner. She is a Champion for Women in Law London network and the First 100 Years Project. In 2015, she founded Women Leaders in Life Sciences Law, a network supporting the international pipeline of female legal talent within life sciences.

Melville was appointed as the Director for Strategic Partnerships and Head of Business Inclusion Initiatives in January 2016, following a successful career in international sales. She also founded and chairs the RBS Focused Women’s Network and in 2010 she was awarded the Women in Banking & Finance Award for Achievement under the category of Champion for Women.

Speaking to WeAreTheCity, Funke Abimbola said, “I am overwhelmed to be recognised in this way and cannot thank my supporters enough for nominating me for a Queen’s honour.”

“Discrimination is a real issue in society and the workplace and a major barrier to progress and maximising potential.”

“I remain absolutely committed to levelling the playing field for disadvantaged and under-represented groups.”

“I have been truly humbled by the hundreds of messages of congratulations since my MBE was announced.”

“Thank you all from the bottom of my heart.”

“My letter from the permanent secretary stated, ‘you have received proper recognition for your outstanding contribution to women and gender equality.”

“This sums up everything that I have been feeling and believe in.”

“This truly puts the work on the map that will make the change shift that is required in today’s business world.”

“My greatest wish is that for every young woman that has been told they cannot achieve, or follow their dreams, receiving this public declaration will remind them that they can achieve their goals – just like I did.”

“I am eternally grateful to all the wonderful people that took the time to nominate me.”

“This year, the Cabinet Office have ten per cent of the total awards going to BAME execs – that in itself is amazing, but to create the change we need, it’s imperative that we continue with our campaign to identify and recognise talented men and women from the BAME community.”

The Queen’s Birthday Honours List recognises people who have made achievements in public life or committed themselves to serving and helping Britain. Honours have been awarded on the sovereign’s birthday since at least 1860.

Marking 100 years of the Order of the British Empire, this year’s awards were the most diverse yet.

In total, 1,109 people have received an award, with 554 successful women candidates making up 50 per cent of the total.

Alison is the Digital Content Editor for WeAreTheCity. She has a BA Honours degree in Journalism and History from the University of Portsmouth. She has previously worked in the marketing sector and in a copywriting role. Alison’s other passions and hobbies include writing, blogging and travelling.
Previous PostSeven books that will change the way you see the worldNext PostMore than 80 per cent of sports now pay equal prize money