0
You have 0 items in your cart
Go To Shopping
Home > Awards > Awards News > Rising Stars: What happened next for Rebecca Fyans 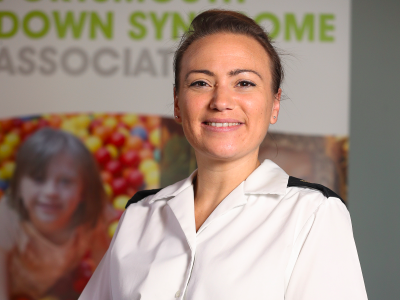 We spoke with Rebecca Fyans, who won a 2018 Rising Star Award in Defence.

After travelling across Asia Pacific in 2004 I realised I wanted to do something different so I joined the Royal Navy in 2007 at the age of 27. I have worked in many different places HMS York, Camp Bastion hospital in Afghanistan and HMS Nelson before I found out I was pregnant in 2012. This is when my life changed for the better, forever.

Sebby was born in 2013 with Down Syndrome (DS). The Royal Navy allowed me to take a career break to dedicate my time to ensuring he had the best start in life. During this time I became closely involved with a children’s charity, the Portsmouth Down’s Syndrome Association. In the last few years whilst volunteering as a charity Secretary, Trustee and new parent liaison; I have delivered training to midwives on how to give a positive diagnosis of DS; lectured college students and educational professionals; spoken at charity events and high profile dinners; been filmed for the Channel 5 Great South Run; organised and taken part in multiple fundraising events; and featured in the Navy News on several occasions.

I am extremely passionate about ensuring new parents have a positive start on their family journey and are given the support they need in the early days following a diagnosis. I actively seek out military families with a child with DS and signpost them to groups and military charities that can support them.

I am part of a global initiative to spread positive awareness of DS, networking with local businesses and organisations UK wide. I thrive on both promoting the charity and the work that we do. I feel proud to be a part of a such a wonderful and close community.

After 4½ years I returned to the RN in June 2017 working in Legal Services at Navy Command HQ dealing with Service Complaints and have not looked back. I am proof that you can have a full-time career in the RN, a husband that is also serving in the military, two children- one with additional needs and a Trustee who aims to inspire women to stay in the Armed Forces after having children.

I was absolutely overwhelmed that I was picked.  I have received lots of praise from lots of people in my organisation.

My story has had great coverage on various RN Social media platforms, The Navy News and the local news paper, The Portsmouth News have also  written articles about the award.  I sadly haven’t been nominated for any other awards nor had the opportunity to speak publicly.  I am constantly doing things to give back to the local community.  I feel the fact that I am an award winner has given myself and the charity that I support a certain degree of clout.  One major achievement that I am excited about is that I have been given the role of Advocate for all the carers in the Armed Forces, which means I am involved in writing MOD policy to support disabled people and carers, both as veterans and serving personnel.

Enjoy the experience, you can never promote yourself enough.

Alison is the Digital Content Editor for WeAreTheCity. She has a BA Honours degree in Journalism and History from the University of Portsmouth. She has previously worked in the marketing sector and in a copywriting role. Alison’s other passions and hobbies include writing, blogging and travelling.
Previous PostHow to negotiate a promotion and secure more responsibilityNext PostInspirational Woman: Pavita Cooper | Director, More Difference