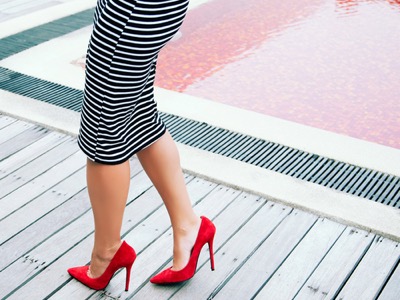 Laws need to be tougher on enforced high heel wearing, according to scientists who have studied the effect of wearing the shoes.

Researchers at the University of Aberdeen carried out a study into the physical damage, as well as the social and cultural aspects, of wearing high heels.

The study, published in the BMC Public Health journal, found that wearing high heels increases the risk of developing musculoskeletal conditions from the toes to the spine.

Despite these risks, the study also revealed that wearing high heels has social benefits. Researchers found that men are more attracted to women wearing high heels. Other benefits found were an increased male attention and a confidence boost to the wearer.

Dr Max Barnis, who led the research, said, “From our review it is clear that despite the huge amount of evidence showing heels are bad for individuals’ health, there are complex social and cultural reasons that make high heel wearing attractive.”

He continued, “We feel the UK government should follow the lead of other authorities who have introduced specific laws to tackle this practice rather than simply relying on existing legislation which has left the situation in this country uncertain and open to misinterpretation.”

“Also, this matter has in the UK been so far addressed through UK-wide equality laws.”

“However, there may be scope for the devolved nations of the UK such as Scotland to consider introducing further measures under devolved health legislative powers.”

Dr Heather Morgan, a lecturer at University of Aberdeen said, “Of course we are not trying to tell anyone that they should or shouldn’t wear high heels but we hope this review will inform wearers to help them weigh up the health risks with social benefits, as well as putting pressure on lawmakers to toughen up legislation so that no one is forced against their will to wear them in the workplace.”

The so-called ‘shoegate’ was centred around Nicola Thorp, who was reportedly sent home from a job at accountancy firm Price Waterhouse Coopers (PwC), where she was employed by the temp agency Portico.

It was reported that receptionist Thorp was sent home from work after refusing to wear high heels for her nine hour shifts.

As a direct response, Thorp launched a petition calling for the government to make it illegal for companies to require women to wear high heels at work.

Alison is the Digital Content Editor for WeAreTheCity. She has a BA Honours degree in Journalism and History from the University of Portsmouth. She has previously worked in the marketing sector and in a copywriting role. Alison’s other passions and hobbies include writing, blogging and travelling.
Previous PostIs it time to go freelance?Next PostWomen in leadership roles – traits that drive success