Only the ignorant would argue against the existence of workplace sexism.

Mostly, feminists advocating for equality ground their justification in principals of morality, fairness and human rights. For those who believe that discrimination is inherently inexcusable, such arguments are self-evident.

But they are unconvincing to the one-in-five Brits who do not believe that “men and women should have equal rights and status in society, and be treated equally in every way.”

Luckily for us feminists, an appeal to decency is not the only weapon in our arsenal. From economic growth to pension funds, the continuation of workplace sexism is hitting even the proudest of misogynists… right where it hurts.

The benefits of a full labour market

The reason politicians so proudly trumpet any increase in their area’s employment rates is because high employment is linked to high economic growth. More people working means more people earning money, which means more money being invested into the economy through consumer spending, and more money pouring into government coffers via taxes.

Worldwide, only 49.5 per cent of women participate in the labour market. According to the IMF, this results in GDP per capita losses of up to 27 per cent in some regions. In non-economic speak, this means that these areas have less than three-quarter of the wealth they could have had if as many of its female subjects worked as it’s male ones did. Even in a developed country like the US, raising the level of female labour market participation to the male level would add just shy of a trillion dollars to GDP.

Using GDP as a measure of prosperity has its critics, but it remains the industry standard for measuring a country’s wealth. The richer a country is, the better quality of life its citizens tend to have, and the more money its government has to spend on everything from infrastructure to welfare. More women working, in short, leaves everyone better off.

The inefficiency of domestic duties

A common response to the above argument is that women must stay out of the workforce to do the unpaid but vital work of childrearing and housekeeping. Encouraging most women to sacrifice other work to focus on domestic issues, however, is economically inefficient.

The reason that free trade has been so exceedingly beneficial to global prosperity is because of something economists call “comparative advantage”. Simply, this means that when groups or individuals can outsource some of their needs in order to focus solely on one speciality, everyone wins. For example, if a woman who is mathematically astute can outsource her childcare/housekeeping needs to specialised nannies, nurseries and cleaners, she can spend her day executing financial trades instead. Because we are more productive when we focus on one, specialised task, output rises and everyone benefits.

High childcare costs or personal preference can scupper this model, of course. But even in instances where one-half of a heterosexual coupling is required to remain at home, it is not economically convincing that it should be the woman. For one, women are more academically gifted than men (and in rich countries, often better educated), making them more equipped to offer the sort of high-skill labour which most benefits economies.

Secondly, both the UN and the IMF agree that when women control a household’s money, they are more likely to spend it in ways that benefit children, particularly through investing it in education. This creates a virtuous circle, because education levels are strongly linked to economic growth too. Indeed, the UN attributes 50 per cent of economic growth in OECD countries over the past 50 years to “increased educational attainment”.

The dangers of shrinking populations

Population decline is now a current or anticipated reality for many countries, as fertility rates worldwide continue to tumble, often below the rate of replacement (i.e. the number of births needed to keep the population stable). At the same time, medical advances mean more people are living longer than ever before. The result is a huge disparity between the number of retired citizens requiring state support -in the form of pensions- and the number of younger workers available to pay for it.

Most countries do not have the financial reserves to make up for this shortfall even in the short term. Without a rapid increase in the working population, therefore, people will have to either work longer or have their benefits drastically cut. Bring more women into the workforce, however, and the problem will be at least slightly mitigated.

The effect of gender diversity

When it comes to consumer spending, women control the economy: they are responsible for 85 per cent of purchases. Businesses looking to grow sales, therefore, need to appeal to them. And as a tactic to discover what woman like, hiring more women has a lot to recommend it.

Similarly, Credit Suisse found that companies with at least one female board member outperformed their male-only rivals by 26 per cent. Bump women up to the very top, and a report by a trading platform found that the average equity return will be 226 per cent better than the S&P 500. In other words, companies led by a female CEO are three times more successful than the average listed business.

The unknown costs of sexism

Why was there never a female Einstein, a female Shakespeare, a female Rockefeller?

Only an exceptionally strong misogynist could argue that amongst the fifty or so billion women that have ever been born, not one was capable of such lofty heights. Instead, it is likely that such women were held back from achieving success by the same pervasive, damaging, illogical sexism that has tainted all of human history.

Perhaps a woman prevented from starting her own business could have been the person who offered you your dream job. Perhaps a woman discouraged from becoming a scientist may have developed a cure for that fatal disease you develop.

Of course, this is only speculation. But a smart person would double their chances.

Beth Leslie is a career and lifestyle writer. She is also the editor of the Inspiring Interns blog, which provides graduate careers advice to young people looking to excel at their first job or internship.

Inspiring Interns is a graduate recruitment agency. Opportunities on their books include graduate marketing jobs, and graduate jobs Manchester.

0Shares
Careersexismworkplace
Previous Post“No victim of abuse should ever again be required to be cross-examined by their abuser” | Judge calls for ban on cross-examining domestic abuse victimsNext PostInspirational Woman: Amel Najjar | Executive Director & Founder of Children of War Foundation 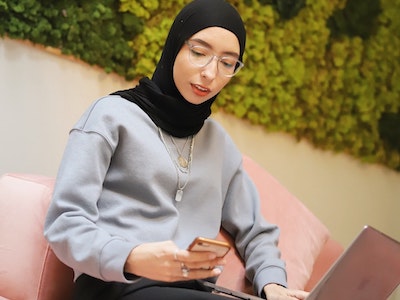