0
You have 0 items in your cart
Go To Shopping
Home > Career Development > Careers for women > Sheryl Sandberg’s Lean In digested chapter by chapter by Jessica Chivers – Chapter 8, 9, 10 & 11 In which Lean In and my book, Mothers Work! overlap greatly, specifically chapter three ‘See your family as a team.’ Sheryl and I have a shared outlook on equality in the home, both believing it is a mindset more than anything else. I write ‘…partnering up, like equality, is an attitude more than anything else. Equality is when you both recognise the need and see the merit in deciding together how you can best manage the totality of your lives. Equality isn’t about dividing everything down the middle.’ Sheryl writes on her marriage to Dave “We are never at fifty-fifty at any given moment – perfect equality is hard to define or sustain – but we allow the pendulum to swing back and forth between.” We learn 18% of women in the UK earn more than their husbands (trailing behind the US by 12%) – which Sheryl explains can be a problem as there’s still significant discomfort for many around this – and that Sheryl herself has experienced the ‘double-bind’ of working motherhood despite having such a fantastic husband.

Chapter 9 – The Myth of Doing It All

With lines such as ‘no one has it all, ‘done is better than perfect’ (on a poster hanging at Facebook HQ) and ‘perfection is the enemy’ Sheryl and I are back in the same space. This chapter pedals the same message as the chapter ‘Go for good enough at home’ in Mothers Work! As I read a thought bubbles up – I hope there isn’t value in authors still writing this stuff when my daughter becomes a mother.

Sheryl shares her evolution as a parent and how she didn’t get things right with baby number one (checking e-mails constantly, exhausting herself by working when he newborn was sleeping etc), but learned to relax and set boundaries with her second child. I nod away emphatically as she puts the ball firmly in women’s courts with “the best way to make room for both life and career is to make choices deliberately – to set limits and stick to them.” This chimes with one of the key messages I’ve conveyed in many a talk on how to unravel the grip of the triple-bind of working motherhood: we must take charge because no one will do it for us. I do wince though at the ‘life’ and ‘career’ dichotomy – this implies the two are separate, which they are not. A good, rounded life involves both.

I’m dismayed that Sheryl almost applauds another executive for putting her children to bed in their clothes to save 15 minutes in the morning. Behaviour like that should ring alarm bells for a family and be a trigger for re-evaluating priorities.

Chapter 10 – Let’s Start Talking About It

In which we learn Sheryl was rightly incensed as a teenager when patted on the head by ‘legendary’ Tip O’Neill (Lib Dem speaker of US House of Representatives) and told over her head ‘she’s pretty.’ Although oddly, in the following years, she denounced feminism, believing it wasn’t something she wanted to be associated with and that it was redundant. The end of the chapter makes clear ‘feminism’ as a concept needs to be properly understood as only 25% of US women consider themselves a feminist, yet when offered the definition ‘a feminist is someone who believes in social, political and economic equality of the sexes’ it rises to 65%. I wonder if the other 35% need their ears syringing.  We learn how and when Sheryl decided to start talking about gender equality: seeing large numbers of female friends leave the workforce and having the support of colleagues Susan Wojcicki and Melissa Mayer at Google.

I’ve scrawled a lot in the margins of this chapter, picking out counter-intuitive ideas on meritocracies and anti-discrimination laws. As well as those there are some positive points of change in some well-known organisations:

Chapter 11 – Working Together Toward Equality

In which Sheryl encourages us all to be supportive of people’s choices, most notably her friend and newly appointed Yahoo! CEO, Marissa Mayer’s decision to take a very short maternity leave. She touches on getting over the mommy wars; that is, ending competitions to prove that staying at home or going out to work when our children are young is the best or right thing to do. This is a message I open with in Mothers Work! Still on the theme of choice, Sheryl makes clear that both men and women need to be able to choose to stay at home or have full careers, she writes “Until women have supportive employers and colleagues as well as partners who share family responsibilities, they don’t have a real choice.” The key word in that sentence is ‘colleagues’ which could have been prefaced with ‘male’ because if women are working alongside men who don’t do domestic stuff and whose wives stay at home, the evidence suggests they can have a negative impact on their female colleagues’ careers. See note 10 p217 for more on this. She goes on to say “And until men are fully respected for contributing inside the home, they don’t have a real choice either. Equal opportunity is not equal unless everyone receives the encouragement that makes seizing those opportunities possible.”

Lean In is a remarkable piece of work which clearly sets out the many ways employers and employees can contribute to righting the imbalance of ease and opportunity for women in the workplace. As an emotionally-charged scientist I’ve relished the rigorous research and heavy academic referencing interwoven with Sheryl’s personal stories and feelings. I thoroughly recommend reading the whole book – indeed I implore you to read it if you’re an EDI practitioner or people manager – and I leave you with a selection of sound-bites from the final chapter:

And that’s what I call a result. Thank you Sheryl Sandberg, for giving us Lean In. For more on Jessica’s work with The Talent Keeper Specialists see www.talentkeepers.co.uk or call 01727 856169. Information about Jessica’s private client coaching practice and media activities can be found at www.jessicachivers.com. 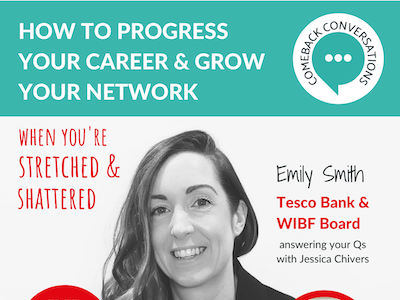