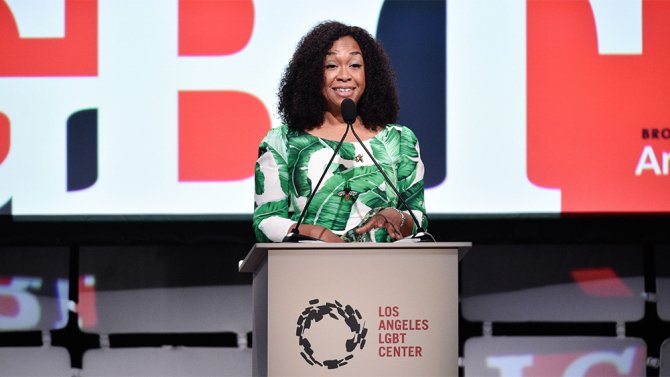 The producer, writer and creator of Greys Anatomy and other popular television shows has criticised Hollywood for it’s portrayal of LGBT + characters on screen.

Shonda Rhimes, who is responsible for the television drama’s Scandal and How To Get Away With Murder, among others, has been celebrated in the past for her diverse casts, which offer accurate portrayals of BAME and LGBT communities.

Speaking at the Los Angeles LGBT Center’s 48th Gala Vanguard awards on Saturday, Shonda called on writers, directors and producers to push for more equal representation in their work.

“We all exist in the world,” she said, according to Variety.

“Everyone has the right to see themselves on the screen, and I think it’s really dangerous when that doesn’t happen.”

“There is a tendency to marginalise or stereotype when these types of characters aren’t seen. People deserve realistic portrayals.”

Rhimes attended ceremony to present an award to Valerie Jarrett, former senior advisor to President Barack Obama, who pushed for the repeal of Don’t Ask Don’t Tell and campaigned to lift the ban against the transgender community serving in the military.

Co-CEO of William Morris Endeavor, Ari Emanuel was also celebrated at the ceremony and took the platform to share his beliefs on LGBT representation.

“We have a huge platform based on the movies we make and on the TV shows we make and the things we do,” said Emanuel.

“If someone is being prejudiced, it’s important to speak up on their behalf. That’s how I was raised,” he added.

Last year, Rhimes was the first female recipient of the Norman Lear Achievement Award in Television since 2001. She received the award for “redefining the role of women in media and spurring the debate about diversity in television.”

How to amplify marginalized voices on a daily basis

Why it makes good business sense to invest in diversity

This is how organisations can improve leadership team diversity