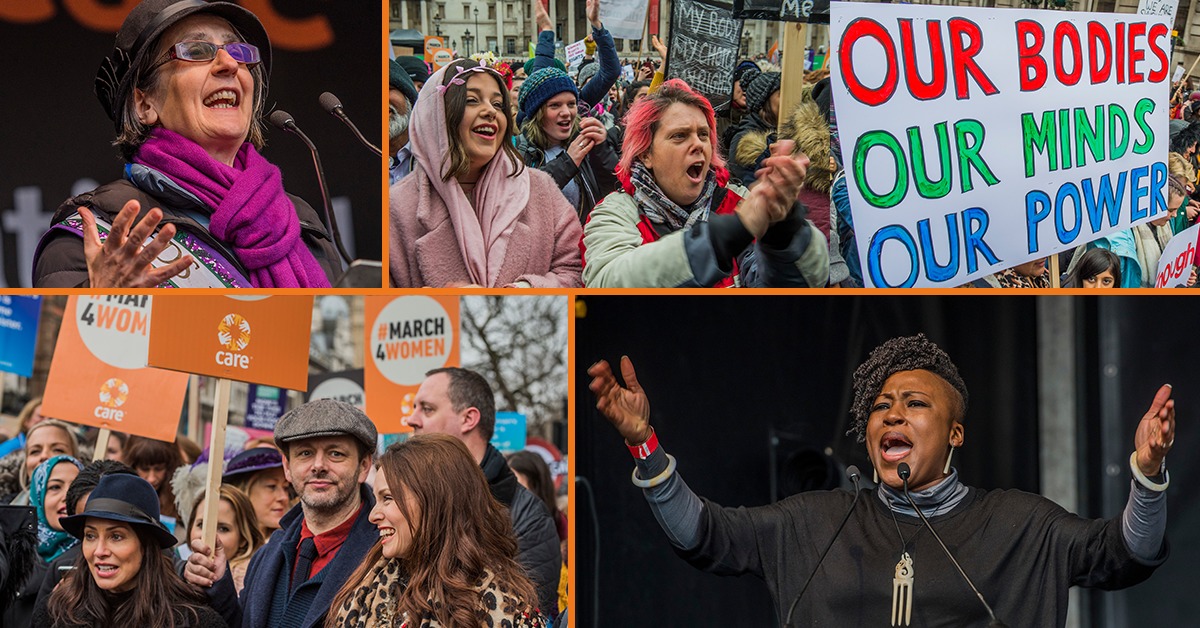 This year’s #March4Women, taking place on Sunday 3 March, will mark 100 years since the Sex Disqualification (Removal) Act which permitted women to enter professions, most notably law – and will celebrate the modern-day campaigners who have challenged the law to change the world.

The event will take place indoors for the first time, with the traditional marching format being replaced by a rousing rally at Central Hall Westminster – a famous meeting place of the suffragettes of old. The line-up will see some of the UK’s best-loved actors (to be announced) sharing the verbatim testimonies of women survivors of sexual harassment, exploitation and abuse in the workplace from around the world, illustrating the universal problem and need for a global solution.

Radio Four’s Jane Garvey will host an inspiring panel of activists who have successfully campaigned to change the law, making life better and safer for women and girls. Speakers will include Gina Martin, who recently saw to it that ‘upskirting’ photos were outlawed; Shaista Gohir from Muslim Women’s Network, whose organisation saw the abolition of repatriation fees imposed on women escaping forced marriages; and anti-FGM campaigner Leyla Hussein, who will reflect on the first conviction for FGM in the UK. Garvey said: “I’m delighted to be able to support March4wonen this year. So much has been achieved but there are still many battles to fight.”

Lady Hale said, “It takes courage to stand up to bullies.”

“Even in an advanced liberal democracy such as ours, there are still battles to be fought, and we must still have the moral courage to fight them.”

“But just as Millicent Fawcett pronounced: ‘courage calls to courage everywhere’, we must not forget that there are many other women in the world who are far worse placed than we are and we must reach out to and support them too.”

“That’s why I’ll be at this year’s #March4Women, 100 years since women were permitted to practice law.”

Proceedings will be led, for the seventh year, by women’s rights activist and international campaigner, Dr Helen Pankhurst, great-granddaughter of Emmeline Pankhurst and granddaughter of Sylvia Pankhurst, both leaders of the British Suffragette movement.

Pankhurst said, “March4Women has grown into the most incredible movement of global solidarity with events now celebrated in thirty countries around the world.”

“In London, we have been coming together each year at a historically significant location.”

“This year, I’m excited that we’ll be raising our voices and calling for change in Central Hall Westminster – a big, beautiful venue used by the Suffragettes in 1914.”

“Come and join us for an afternoon of fun and purpose, song and solidarity, ahead of International Women’s Day.”

The event takes place from 2.15pm to 4.15pm and tickets are available from the Care International website. There is also an option for complimentary tickets for those whom entry cost might be a barrier.