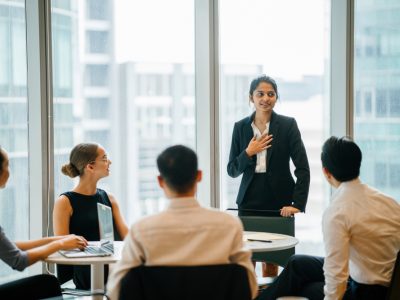 Caroline Criado Perez, feminist campaigner and author of Invisible Women, explains in her best-selling book that one man she interviewed, when asked to justify why there were no female figures on the reverse of sterling banknotes, simply said “Women are everywhere now!”

His perception is right, women are everywhere. At 50% of the global population, they always have been and the social media #MeToo movement would have us believe they are now much more visible too. But are women actually any further on in their struggle when it comes to reaching the very top of their professions?

According to research conducted by Aziz coaches, influential women in business are still in the minority. They make up just 19% of boards and 22% of senior management teams. Why? Having the confidence to succeed and a vision of what success looks like are big limiting factors. For many, earlier ‘feminine conditioning’ to ‘people please’ and ingrained unconscious bias hinders professional success and advancement.  Women tend towards perfectionism and have a habit of ruminating over perceived mistakes, which can lead to missing opportunities.  There is also evidence of “over- functioning”, by compensating for less competent or motivated colleagues without taking any credit.

This article, with contributions from our highly experienced female coaches, outlines how women anywhere can make progress and become more influential, through greater self-awareness and powerful communication. Here are some of the essential ingredients that women should work on, in order to equalise the influence gap.

Never underestimate the role of communication as a foundation for influence. In the vast majority of cases, women need coaching to change the way they speak and remove inadvertently undermining and diminishing words from conversations. No more ‘just a quick’ email or feigned incompetence ‘I’m no expert on this’ but… or ‘what do you think?’ When offering an opinion, it’s essential to be more direct, less tentative and become confident to ‘own’ your expertise.

Linked to this is the ability to say ‘no’. Men do say it all the time whereas ‘good girl’ conditioning means that women are more likely to say yes to tasks that may not serve them. Becoming more assertive and comfortable with saying no requires clarity on goals and boundaries, plus coaching to practise declining or accepting the right opportunities.

Firstly, understand the subtle but important distinction between influence and pure power – they mean very different things. Men tend to regard being powerful as central to winning, whereas women will prioritise the ability to shape ideas and agendas. Given that the workplace today is more collaborative, being influential is far more relevant and inclusive of a wider group of stakeholders.

Women seeking to progress in their organisations will benefit from ensuring that key decision makers can properly appreciate the difference. Being influential is really about developing relationships based on trust. This applies no matter your gender. What is different for women is that earning that trust can be more difficult in the first place.

Women also need to become as proactive as their male colleagues at embedding their influence, by forming strategic alliances, building connections and strong networks and seeking mentoring and sponsorship. This could be described as working on your career as well as in your career.

It is impossible to get anywhere without the right network. You need advocates, sponsors, mentors and trusted allies (truth tellers). Who are they? Go to very targeted networking events to cultivate them.  Arrive at meetings early or stay behind to network.

A starting point to climbing the ladder is creating a ‘relationship map’ in which you chart the connections and networks that hold the key to achieving and amplifying your influence. Understand the distinction between each contact. Whilst mentors are important for giving guidance and truth tellers will keep you grounded, it’s advocates and sponsors that can really open new doors. In her 2018 Ted Talk, Carla Harris, one of Wall Street’s most influential women said: “A mentor is a nice to have, but you won’t ascend in any organisation without a sponsor.” Our view is you need both.

There is a lot of truth in the saying ‘you make your own luck’ but it comes in the form of proactivity. Becoming influential takes an entire ‘village’ of supporters and to attract their attentions you will need to do something differently, be prepared to take some risks and stand out through hard work. Come out of your comfort zone and if people can see you are on the road to success, they will be more willing to facilitate your journey. No one is going to risk their own reputation if they aren’t first clear about the abilities and qualities of the person they are sponsoring.

Research shows that where women are concerned, there is an inverse relationship between likeability and competence. The more competent a woman is perceived to be, the less likeable they are, with successful women routinely portrayed as being ‘hardnosed’ and ‘bitches’. To overcome this, women need help to think consciously about how to communicate competence whilst also being considered likeable and trustworthy.

Listen and be prepared to change

The most influential women understand that success is 90% about asking the right questions and listening – especially when working inside larger organisations. There is a big difference between hearing and listening – the latter implies ‘deep listening’ with the aim of gaining a deeper understanding of what is actually happening, and potentially being left unsaid. Practise active listening by becoming more curious and asking powerful questions so as to draw out more from the person speaking. Armed with this level of insight, you are in a much better position to influence people and events.

There is a world of difference between building a reputation for excellence and being an overt ‘show off’, but it can be difficult to reconcile the two. Influential women are able to strike a subtle balance between getting recognition for their individual achievements and being seen as arrogant or boastful.

To cultivate presence, start with a personal SWOT analysis, to identify what you are truly good at and where you need to improve. Accept challenges or extra-curricular activities even if you are unsure how to do them – worry about ‘how’ afterwards. Always give credit where due but never let self-deprecation sabotage getting recognition and building reputation.

Overall, think big. Trust your ability to influence and you will succeed.

Katie Botten, with contributions from Ann Akers and Emma Fulton. All three authors are executive coaches specialising in working with women to help them achieve their full professional potential.

How are your team doing with their professional relationships?

Are you speaking your clients’ language?