0
You have 0 items in your cart
Go To Shopping
Home > Lifestyle > Weddings > The Honeymoon Part 5 – Night Fishing the game was on! – B2Be Blog

So it was a bit of a game with me and Matt, we both loved night fishing and we were both very competitive.

Now the thing to remember is I was wayyyyyyy ahead of the hubby when it came to fishing. He actually hadn’t caught anything before bless him.

Its not proper fishing with a rod or anything, you get given a line with a hook on it and off you go. There was however a knack to it and from experience woman seemed better able to judge when a fish was nibbling on the bait. I guess I have to explain our previous fishing trips in order to better build the picture.

So we went to sun island in 2007. We booked the fishing trip and even made it so far as to get on the boat. However a storm was brewing and about 10 foot out from the jetty the boat driver decided it was to dangerous and turned the boat around. Thing was he turned the boat on a wave which felt as if the boat was going to capsize. Poor matt got completely soaked and I was screaming for my life. It was pretty scary to be honest, the sky was sunny one minute and then black as angry clouds rolled in. Thankfully we made it to shore without any accidents but no fishing trip :(.

In 2008 we went to Kuredu island where the contest began. On our first trip I caught about 3 fish including a beautiful surgeon fish, I felt really bad with this one and wanted to put it back but it was worth a bit to the boat men.

Matt having not caught anything decided we had to go on another trip so he could redeem himself, if only he knew he’d get another whooping haha.

On the 2nd trip I upped my score to 7-0. I caught 3 snappers and of all things a baby barracuda. I will say this Matt did help me haul in the fish, it may have only been a baby but it was incredibly strong.

When it first nipped my line I honest to god thought I’d caught a shark, it took all of my weight to simply hold the line.

I had my feet braced on the edge of the boat and nearly went in. One of the boat men grabbed the line seeing me struggle but still we couldn’t hold on so hubby came to the rescue and hauled the fish in. I was gob smacked when I saw it was a baby but it had wicked sharp teeth and the boat men were over the moon when we said they could have it. It was worth about 3 months wages to them. Me and Matt aren’t big fish lovers so we gave them my catches.

7-0 was the score and Matt was eager to get out on a fishing trip on the honeymoon. We sat on the boat and Matt was a tad quiet, I asked what was up and he just gave me an evil saying it was on. I burst out laughing but then did my best evil look right back. What do you think of our evil game faces lol? Unfortunately they didn’t do us any good as neither of us caught anything. But persistent as always Matt booked us onto another trip and bam we both caught something.

Watching matt catch his first fish was probably one of the cutest times I’ve ever seen him. He looked like a little kid hoping up and down while he hauled his fish in with a massive grin on his face. I then caught a fish only little snapper and then Matt caught another one with the same joy as the 1st. So the score stood at 8-2 – I win haha.

In between the fishing trips we were invited by the island manager to a cocktail reception. I had missed lunch again that day too busy snorkeling so I was pretty starved by the time we got to the reception. It was a really nice setup, right on the beach next to the jetty. The cocktails included cosmo’s and sangria and both were super strong. We got chatting to a nice couple and before I knew it my words started slurring.

Uh oh how many had I drank? Matt was just grinning at me.

I think I’d had about 7 cocktails without even realising and damn did it hit me hard. We stayed at the reception for a little bit longer and then headed to dinner. I was stumbling slightly as I was quite drunk and once again Matt who can handle his drink was fine.

Dinner that night was amazing. They were serving different meats cooked on a BBQ including lamb cutlets, steak and chicken. They also had  jacket potatoes – I was in heaven. I ate about 6 lamb cutlets and 3 jacket potatoes as well as about 5 pieces of naan bread hehe.

Yes I love my food 🙂 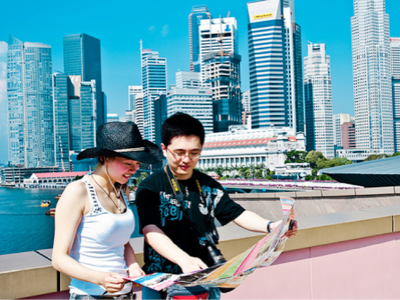 How to Plan a Stunning and Stress-Free Honeymoon 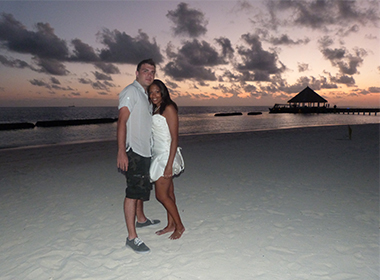 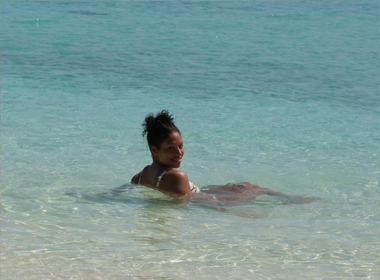