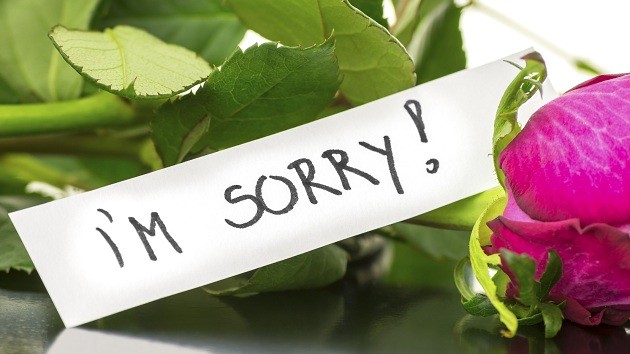 I learned to say sorry the hard way.

It was my first big job – editor of an independent women’s magazine given away in SPAR grocery shops (look we all have to start somewhere!).

I organised a competition and the prizes were a collection of about 12 grocery items – a huge bag of flour, bottles of tomato sauce and so on – you get the idea. It was a popular prize and there were 15 winners.

But I came to the unhappy conclusion that I had omitted to delegate who had to pack and post the prizes. Well readers, that was me – and one Saturday I arrived at the office with stout bags, address labels with my sainted boyfriend (I married him and I definitely think his aid in the packing made me say yes.)

It took all afternoon to put all the products in the bags, address them and take them to the post office. But the result was not quite what I wanted or expected. The Post Office complained to the grocery company that their postmen were covered in flour while the bottles had all broken and the competition winners protested bitterly at the mess they opened.

I was summoned to the Board which regarded this as the worst kind of public relations. But I got some great advice from one of the directors who saw my pale sweating face as I waited to be called in.  “Take full responsibility and just say sorry,” he said.

So I did. I explained it was an excess of enthusiasm, that I was genuinely sorry and was going to apologise not only to the winners but also to the post office (and their postmen). Honestly the effect was startling. The Board all started relaxing and indeed smiling. The MD said they would send vouchers to the winners and they all wagged their fingers at me cheerily and said, never again. To which I earnestly said “Definitely.”

It was a great lesson and if Richard Nixon, Bill Clinton and others caught would apologise right at the start instead of trying to cover up, things would have gone better for them. And for Amber Rudd who waited too long to say sorry – that’s as bad almost as never saying it.

My networker Jayne Constantinis who ran a terrific workshop on communications after one of the network lunches has her own take on this.  She says “Over the last few days, in the run up to Amber Rudd’s resignation, the issue of apologising has been under scrutiny. Likewise in my training room, it’s a topic for analysis and debate. How do we rate, for example “apologies for the inconvenience caused” versus “I’m really sorry that this is going to cause you a problem”?

“What about tone of voice and the non-verbals which accompany the words? Careful not to give yourself away with inconsistent signals, as Albert Mehrabian’s much misquoted ‘7, 38, 55’ rule of communication illustrates. You may be saying the right things but if your tone and non-verbals suggest you’re not genuine, your audience will believe tone/body language/eye contact rather than the words.

“I happen to believe that an ability to apologise is one of our most vital communication tools. Wars have started, marriages have failed, friendships have faltered and law suits have been pursued because someone didn’t have the strength and skill to say sorry. For that reason it’s one of the topics I cover in my workshops with school children. The aim – to get them into the habit of taking responsibility for their actions, explaining what happened and offering a remedy. We call this three part structure a ‘Dog Ate My Prep’. But it’s also about re-framing the act of apologising as a sign of strength and confidence rather than of weakness. The ‘sorry’ word (when genuinely expressed) diffuses others’ anger and empowers us.

“A ten year old girl told me how she’d apologised to her teacher for failing to do her homework. She used the word ‘sorry’, explained the circumstances (big difference between an explanation and an excuse) and offered to do the work at break time. Having recounted the conversation to me and the other children, she then said: “And do you know what, I felt much more in control”.

From the mouths of babes, eh…

Lady Val is our Life of a Lady Blogger. Lady Val is also the founder of 'Lady Val's Professional Women's Network.' You can Reach Lady Val on: Life of a Lady Blog, Lady Val's Professional Women's Network
Previous PostFive secrets to cultivating a stand-out leadership styleNext PostStand up to your obstacles today and live the life you want 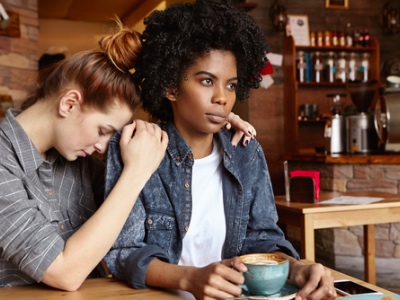