0
You have 0 items in your cart
Go To Shopping
Home > #Vote100 > #Vote100 News > #TimesUp: Women across the globe march for gender equality 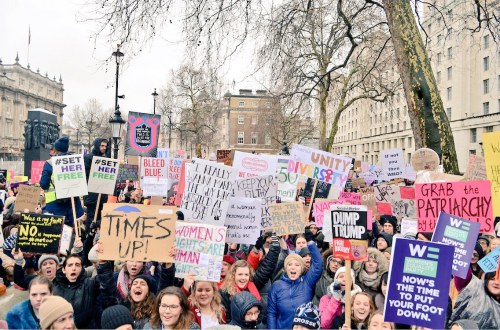 Women across the globe took to the streets over the weekend, to march for gender equality and an end to sexual harassment.

The #TimesUp and #MeToo movements were created in support of victims of sexual harassment and assault. The movements picked up momentum after a number of high-profile Hollywood celebrities were accused of sexual harassment, including Terry Richardson, Harvey Weinstein, Kevin Spacey, James Franco and many more.

In London, women, men and children of all ages took to the streets carrying signs with slogans such as #SetHerFree, ‘my name isn’t “smile darling”, and ‘same s***, different century’.

Pankhurst said, “It’s this generation’s responsibility to push for change.”

“It feels so powerful that it’s one issue after another, one statement is built on by another, another woman speaks out, another man is made accountable for his actions.”

“I truly hope I’ll see equality in my lifetime.”

In America, the marches fell on the one-year anniversary of President Donald Trump’s election into office and many of the placards were focused towards this.

Eva Longoria, Natalie Portman, Viola Davis and Scarlett Johansson were amongst the celebrities who took part in the marches.

Trump hit out at the protesters on Twitter, tweeting, “Beautiful weather all over our great country, a perfect day for all women to march.”

“Get out there now to celebrate the historic milestones and unprecedented economic success and wealth creation that has taken place over the last 12 months.”

Alison is the Digital Content Editor for WeAreTheCity. She has a BA Honours degree in Journalism and History from the University of Portsmouth. She has previously worked in the marketing sector and in a copywriting role. Alison’s other passions and hobbies include writing, blogging and travelling.
Previous PostHow to enjoy public speaking (and be rather good at it)Next PostFour New Year Resolutions to make for your small business