0
You have 0 items in your cart
Go To Shopping
Home > Culture > Film, TV & Music > Viola Davis gives inspiring toast at the TIME 100 Gala

The TIME 100 Gala took place on Tuesday, with Viola Davis giving an inspirational toast to the room about using their platform to influence others. 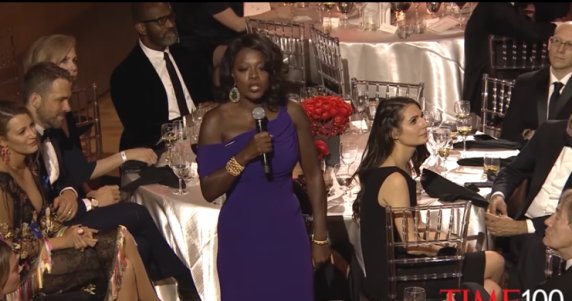 Davis was acknowledged alongside 99 other motivational figures for TIME magazine’s ‘100 Most Influential 2017’.

The actress took the opportunity to tell a story about when she went on a cultural safari in Africa and met women of the Mandinka tribe in Gambia. She witnessed the tribe participate in a ritual asking God to bless a group of infertile women, and felt ‘enthralled’ by their community.

Davis related the event to being surrounded by the trailblazers in the room:

“Everybody in this room, I’m sure, at some point has gone through something in their lives and you survived it.

“But not only did you survive it. You took that trauma, that hurt, that revelation, that whatever it was and you used it to connect, to give, to influence. To help,”

“And that is the beauty and the purpose of what we are here on this earth to do.”

She continued, “I lift the glass to everyone in this room, everyone who has decided to live a life bigger than yourself. Everyone who decided to slay those dragons and say, it’s not just about me. And I applaud you. And I am honored to be in this room with you.”

The Gala celebrated the activists, entertainers and icon’s that have influenced and brought about change in the last year. Recipients included supermodel Ashley Graham, singer Alicia Keys, leaders Theresa May and Elizabeth Warren, and author Margaret Atwood.

Meryl Streep told TIME that Davis was inspirational because she has embraced her culture fully:

“But her importance in the culture—her ability to identify it, her willingness to speak about it and take on responsibility for it—is what marks her for greatness.”

Check out the speech below: